Now, we're on Monday in this trip. Monday was an eventful day since we had to pick up my dress and determine if it would fit.

There was some very bad things going on with the alterations person. When the other ladies had gone to get their dresses, they'd needed some alterations. However, the other tall, skinny woman who was in this wedding (the groom's stepsister) did not need them at all; her dress fit everywhere perfectly. My sister presumed that since I'm of a similar height and weight, mine would also be fine.

Furthermore, this alterations person had royally screwed up on fixing things & in the case of the other matron of honor the dress had to be re-done because she'd used coral colored thread on something that should have been done in yellow. These dresses already took a very long time to arrive so this simply added to the dress.

We got my dress. I had to try it on much later because other things were going on. My sister had to meet up with her future mother in law to discuss food at the reception. This being my first time in a Sam's Club, I decide to wander around and compare the selection to warehouse clubs I've been to. It's very similar to the stock at BJ's & I did manage to get a few things while there since her MIL was kind enough to use her card for such purposes.

My sister also really did not want to subject another person to this alterations lady. Hell, she probably didn't want to expose this woman to me because if you screw up a nice outfit of mine, I'll unleash a huge tirade & probably threaten legal action against you if not outright bodily harm. I may even commit it for all we know. I'd have refused to pay for someone else's fuck up but in the South, you have to deal with people who grouse later but faux happily pay for someone else's screw up. I'm way too assertive & value my money too much for that.

Check out the shoes I wore: 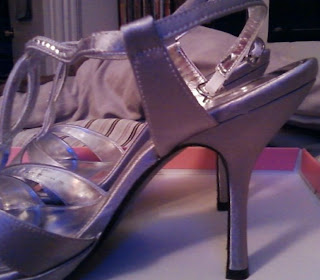 Believe it or not, these were 4 inch heels. My mom & everyone else seemed shocked I could walk well in these.

You'd think these would be high enough for my dress & my biggest problem would be these making it too short. Nope!

The dress was very long. In fact, my mom said the hem should be taken up about 1/2 an inch or maybe an inch. My sister starts on the quest for shoes with a higher heel and a lighter silver shade. She claimed those were too dark. I was simply the model here, thanks.

Speaking of which, when I tried on the dress, my sister claimed that I had the perfect figure for it and ought to be modeling for the company that made it.

You hear that? I would be thrilled to get a job where I got to model evening dresses. Hell, if you give me some money & free clothing I'll be a very happy camper; I'd even take free clothing if you paid for my travel costs. It would be more of that positive reinforcement of "you're pretty" that I didn't get much of as a kid. More sticking it to those jerk guys who wouldn't date me or declared me ugly back in the day; I'm also big on symbolism.

Ultimately, the shoe hunt (which went into Tuesday) was a wash so I ended up with these shoes. It was believed that since I could walk in them down the aisle & didn't trip on the dress, I'd be fine. These people apparently forgot that I used to dress up most days in high school complete with heeled shoes since I worked at JcPenney at the time and got good discounts on stuff I could wear to work.

Guess who we run into at this Sam's Club...the other matron of honor with her young daughter. She proceeds to hang out with us more that day, including eating lunch with us.

Now I don't know why but her daughter formed a bond with me and wanted to hang out with me. I had no problem obliging. While I have no desire to have children of my own, I'm not a child hater. I love my nephews and I really feel for this kid and all the crap she's had to go through with her mother in the past year. Her home life was completely shattered because of her mother's behavior. She told me about seeing her dad & talked about him most of the time I talked to her; you can tell she loves him.

This also provides me with a good excuse to not to deal with the matron of honor. My 1 year old nephew was also there so I spent my time interacting with the kids. I also felt it was important to try building a bond with my nephew since it's not like he'd get to see me again for a while.

Another upside of the day was getting some strapless bras in my impossible to find size. My cousin happened to work at the place where I got them and recommended a great product that hasn't slipped on me once. I even got some free socks because the bras were enough to earn me a free package. Nice, huh? Believe me, this was extremely valuable to me.

Continuing this shoe hunt into Tuesday, more events are planned. We're slated to go for nail work and pedicures with this matron of honor as well as her daughter, the flower girl. Her daughter's a girly girl who's really looking forward to the event. However, I'm not really looking forward to dealing w/her mother since I like to decide who I deal with. For my sister's sake and in agreement with her, I'm maintaining civility until the wedding is over.

In part 4, I'll discuss what happens when you give an eyebrow wax to someone who's skin apparently hates her, getting your first pedicure and more interesting tales I need to purge from my system.
Posted by Film Co. Lawyer at 8:52 PM