If The World Really Worked That Way...

So, I saw this alteration to a "Jesus Saves" graffiti in the subway that tempted me to write my own response: 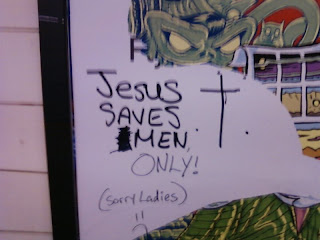 In seeing this, I was sorely tempted to write something like "Think you've got that reversed." After all, men tend to be vilified much more in our society. They can't teach small children or even look at them without people accusing them of being pedophiles. If they end up in a situation with an unwanted child or paternity disputes, people almost always side with the woman & brand the guy a deadbeat dad. How many falsely reported domestic abuse or sexual harassment cases go against men vs. women?

I'm also a feminist & figured this guy was inviting wrath from the hard core, man-hating feminists, of which I'm not. I certainly don't hate all men considering I only dated guys, married one + have guy friends, acquaintances & business contacts.

Then, I felt it showed precisely why Calvinism failed. I'm not a religious scholar or expert but the basic view of Calvinism is as follows:

You get assigned a status before birth: saved or damned. You don't know what your status is & you can't change it with your good or bad deeds. Only when you're dead will you know if you're going to Heaven or if you're doomed to a lifetime of eternal Hell.

Now I could be missing things there; remember, I'm not a religious expert & certainly no expert in Calvinism. But...

if indeed Jesus only saved men, women are now being given carte blanche to do whatever they want to. I could go cheat on my husband w/my hot law school friend who actually asked if I'd consider being with him if my husband left me. Yes, my husband hates that guy though I see a lot of myself in him & I feel like he's one of the few people who'd be around me for myself instead of my career or its perks. I also question his sincerity in any feeling for me since I don't know whether he says such things to all women, most women or just me.

If I were going to be damned anyway, what's to stop me? If all men could do anything they wanted, good or bad, and STILL be saved while I could be perfect & go to Hell, why wouldn't women just be complete jerks to all men?

So, law school friend (you know who you are) if I actually believed that was the world order, I'd indulge you. I'd also do plenty of other despicable things to men & people in general.

Essentially, this is why Calvinism doesn't work: Most sane people at hearing that basic premise say "Hey, if my earthly deeds don't matter I may as well live it up while I'm alive. To heck with society's rules. Let's ALL do bad stuff!" Certainly everyone I was in classes with (mostly "smart kids")when learning about this expressed that exact viewpoint & said they'd view it that way.

Can you imagine what that world would be like? If you thought it was hard & tough now, that would make it a thousand times worse. Face it, chaos would ensue & it would end up being every person for themselves. It essentially absolves people of all guilt or fear of spiritual repercussions for doing anything. We'd probably have more vigilantism as well, don't you think?

So, sexist cretin inviting the wrath of man-hating feminists or proof that Calvinism doesn't work? You decide.
Posted by Film Co. Lawyer at 11:05 AM