One of the great things about living in NYC is the subway graffiti & alternations to advertisements. Some of the funniest things are off 14th Street & in Brooklyn (at least in my area of it, the rising hipster enclave).

We have one vandal who constantly puts up religious graffiti. The "Jesus Save" person, as I've nicknamed this jerk. I've gone into why this vandal is a jerkward before but this little piece of work is just downright funny. Take a look: 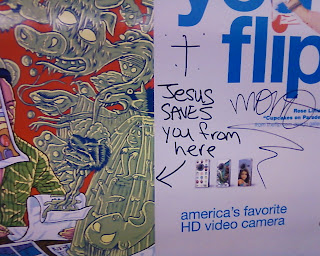 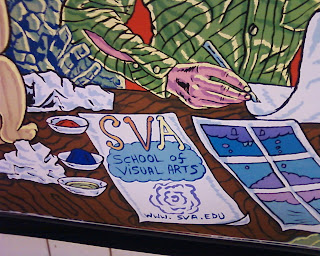 Yes, seems Jesus saves people from an education at the School of Visual Arts! 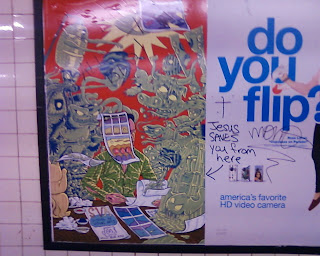 In other words, I'm to believe being a religious person means you're devoid of any type of creativity or right brain activity to speak of! Don't have an original thought or point of view; God hates that! You'll go straight to Hell!

See, this is the fundamental problem I have with the concept of God that nuts like this follow: you're supposed to be a completely compliant, passive moron to receive God's grace. I strongly disagree.

I feel that if God gave you intelligence, a creative mind, etc. that God would not then turn around & say "I gave you these talents but don't you dare use them or you're going to Hell." The God I follow would want you to use those skills to do something good for society, your fellow man, whatever. God wouldn't support being an idiot and letting Republicans, rich people, televangelists or any other so-called "better" figuratively rape you, literally steal your trinkets & claim to do this "for your own good."

I have strong suspicions that this vandal doesn't think. I see this obnoxious proselytizing everywhere & evidence that this asshole is your typical nosy jerk who dares to tell women what to do with their private parts as well as micromanage everyone else's life but ignores every single shortcoming in his/her own life. And if you say you have no shortcomings in your life, then you are full of shit because everyone has at least one.

Plenty of religious people manage to be good followers without butting into people's private affairs or belittling those who don't follow their god of choice. How come more don't follow suit?

Want to attract people to religion? Some being a closed minded bigot & be decent to ALL people, not just "believers." That kind of thing would go a long way to bridging that divide between religious folk & atheists.
Posted by Film Co. Lawyer at 12:03 PM