The Surreal Adventures of The Angry Redheaded Lawyer: "The Winter's Tale" -- Shakespeare in the Parking Lot Presented by The Drilling Company and The Clemente

You might have thought the Surreal Adventures series was dead or even going to performances would be dead after the crazy 2+ years we’ve had.

Well, life can surprise you sometimes. The pandemic, being out of NYC for most of 2020, an intense relationship with a guy who brought back feelings I thought died with my divorce and who continues to confuse me months after discarding me, learning that I indeed am not suited to work in the average law firm, finding my dream job and trying to get my own apartment once and for all….those are their own surreal adventures.

I’d heard about shows starting again and knew I should get back out there but I suppose inertia, apartment hunting, emotional pain and general feelings of frustration and disconnection had been holding me back until I personally got an invite to see this one. This isn’t a show I had read or was familiar with despite being a Drama kid in high school and having an acting background so I had to read up on it to see if I might be able to review it properly. I could so off I went and here we are.

First off, great move on the organizers to do this at 7 pm vs. prime time sunburn hours. This super pale natural redhead who burns in 2 seconds thanks you kindly. The parking lot at The Clemente also happened to have a shady area where seating was set up and where I sat so no worries I’d burn. This one is also an actual parking lot; I would never notice it was there if I hadn’t had the street address to look for. The entrance was quite subtle but the venue itself definitely had that Lower East Side city feel if you’re looking for that.

When it got dark outside, the lights came on very gradually and I didn’t even notice the change so someone paid very good attention to this.

Second, they had comfy chairs. This might have been because I was attending on a Thursday night but I had no issues with seating and kept some distance since I’d do that under normal circumstances.

I read of this going into the modern age and I saw that in wardrobe and some of the staging. For example, this show starts with 2 characters in an arm wrestling match. 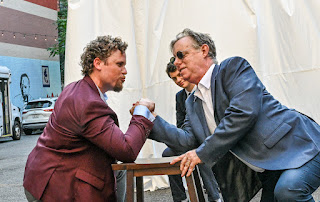 Tell me that doesn’t still happen in real life when you get guys involved in some kind of conflict. I suppose guys I dated never really did that but I know some might have straight up gone for throwing punches if they had to or told me they’d run away in the face of conflict. The doomed prince is also shown completely consumed on his smart phone while the interactions between his parents and his father’s suspicions of the pregnant Hermione’s fidelity grow as they interact with Polixines. 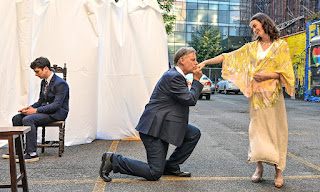 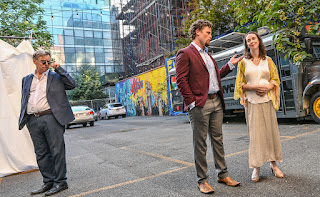 I’m also not sure if “my wife’s a hobby horse” is a line from the original Shakespeare but if it is, it only shows that Shakespeare’s work is just as relevant in the modern age as it was in the past. We certainly still have false accusations ruining people’s lives, people getting stuck in the middle of someone else's conflicts as Camillo was, people trying in vain to convince someone to see reason and have compassion for others, class conflicts in relationships, kids being blamed for things they had nothing to do with and people sticking to their stories even when contrary information no longer supporting them is presented in their faces. 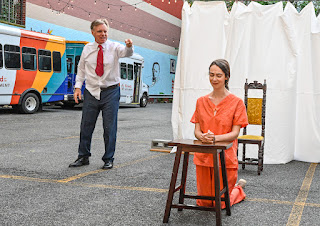 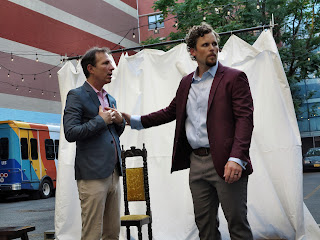 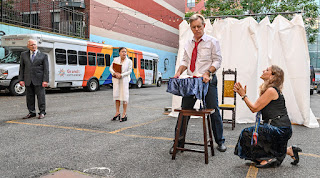 Contrary to some who say this play is “problematic” for Shakespeare’s work, I feel that maybe Shakespeare came to some heavy realizations later on in life that informed his final works (as this one is part of). I, for example, thought I had more of a goth sensibility until both my father and my ex-husband’s sister died within 1.5 months of each other and I had to go to the funerals almost back to back. I’ve also come to bigger realizations in my own life such as having far more maturity and restraint that I did when I was younger, being far less tolerant of roommate situations these days than I was in years past, not putting up with treatment from guys I’d have been okay with in the past, that sort of thing.

Perhaps Shakespeare felt at the time he wrote this that life was a balance of tragedy and comedy and that both can exist in the universe of some play. Maybe he didn’t want to deal with all sadness all the time and wanted to give the audience some hope after you’ve had everything taken and you feel contrition for your bad behavior. Just my two cents. 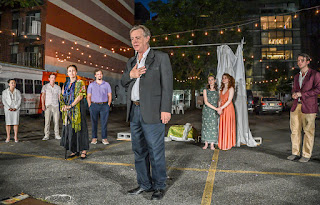 Photo by Lee Wexler/Images for Innovation

The costuming was definitely on point. I love the “I (heart symbol) (sheep symbol)” shirt the shepherd’s son was wearing. He and his father got the laughs along with the salesman at the festival and the pickpocket who later becomes something of a “good guy” in this tale. 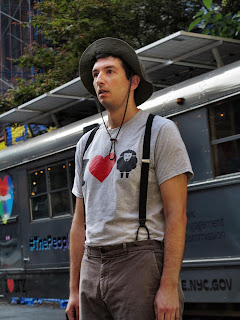 Overall, definitely worth seeing even if you’re not a Shakespeare scholar though you’re probably not going to sneak some of the dialogue or context past young kids. I instantly knew what the “hobby horse” line meant so I’m pretty sure most kids will as well or you’ll be the parent being asked about it. I’d say this show is fine for your teens and maybe your tween as long as you’re the sort of parent who’s okay with questions and explaining complicated adult stuff to your kids.
Posted by Film Co. Lawyer at 9:39 AM No comments: