I recently went to a Yelp Elite event at a sex shop. This was my first trip to one in a while & I got some stuff I wanted to try out including furry handcuffs. The irony with me getting handcuffs is I have serious anxiety when it comes to being restrained in intimate moments; I only allowed that with my estranged spouse & wouldn't let any other guy do that unless I really trusted him. He'd also have to agree to be restrained since if you guys want women to let you restrain them, you're going to have to agree to the same thing or shut up.

So I actually have a unique history with sex shops. Legend has it that the owner of a huge sex store in Atlanta was an alumnus of my university & tried to give the school money at one point. Back when I'd gone there & recently graduated, they constantly hammered & begged alumni for money. They poor mouthed so much, you wondered how in God's name they managed to keep the doors open. I remember them hassling me months after I graduated & was still in my grace period for repaying student loans; due to the state of affairs at that time along with my personal circumstances, I thought it was extremely crass to go asking recent graduates to contribute to the school. The economy wasn't even as bad then as it was post-2008 so if some school is doing that today, it's even more insulting & tacky.

So with all this begging, you'd think the school would have taken the guy's money. The story goes that they rejected his offer. Why? Supposedly b/c they didn't approve of his business. They apparently weren't familiar with the saying "Beggars can't be choosers."

My sorority chapter was filled with some evolved & cool ladies who had a sense of humor along with a more laid back attitude on matters of sex. I remember quite a few candid conversations about sex (some I listened to & some I was part of).

In fact, we once had an impromptu sorority field trip to this huge sex store in Atlanta (the one & only Inserection). It was actually my first time going to a sex store so it was somewhat eventful for me. As a bunch of girls often do, we browsed, observed, made comments & had fun on this little jaunt. One of my sisters sees a girl on the cover of a porn film & says "That looks like The Angry Redheaded Lawyer" (back when I was merely an angry redhead). I point it wasn't b/c if it was, I'd have a lot more money than I do. Paying tuition wouldn't have been an issue, though I wouldn't have gotten to be a lawyer.

One girl in my sorority dated an artist who gave her a plaster mold of his penis. I didn't see it myself but we definitely heard the story. They also saw the massive amount of flowers I got from Psycho Boy when I was participating in sorority stuff one weekend. A lot of us had that sisterly rapport with one another.

Except for that & more recently, the only other times I remember going to sex shops was with my spouse. We went to one with a very pushy salesperson but I will give her this: she was informed & helpful when we had questions.

If you're going to work at a sex store, there are some requirements:

I heard a couple days ago that my ex-friend apparently married this man so he wouldn't get deported. Personally, I think deportation would have been fine & if no one in her family has had a stroke from her birthing his baby and/or marrying him I'd be shocked. This is a woman whose family is more religious than mine & whose grandmother wouldn't let our gay classmate into her house after he came out. I'm sure the affair & the interracial stuff had to make them happy.

2. You need to be non-judgmental. Do you really think people want to talk to a judgmental asshole? Gay, straight, I don't care. People's sex lives aren't your business so if you want sales, remember money is money regardless of where it came from.

Sex shops I've been to, especially in major cities, cater to everyone's tastes & preferences. Gay people have demands as well as straight people. I have to wonder if that holds for smaller cities in the South; you know how judgey they are about gay people & "alternative" lifestyles down there.

3. You can't be the type who giggles & gets all cutesy. The place I went to was having workshops & if you're going to educate people, you can't do it if you're giggling the whole time or look completely embarrassed.

So maybe you should have a little bit of sexual experience if you're going to take a job at a sex store.

Now, for the visuals. I have pics from my adventure: 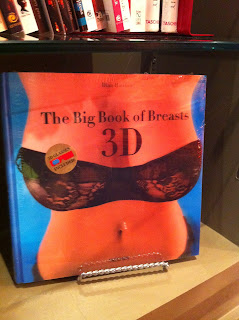 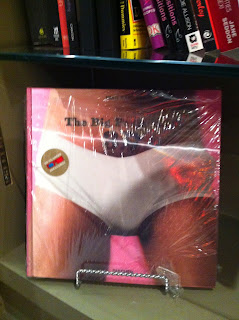 That's an example of why this place rocks. They cater to both genders & all orientations. Unless someone were a total prude or had no sexual interest at all, I can't see objections to one of these as a gag gift.

I even saw stuff I have never seen before: 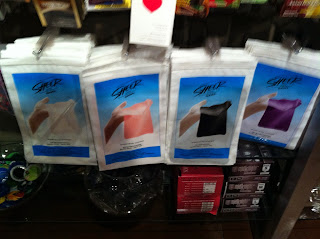 I've never seen these before. Didn't check the price but you can only use them once according to the package.

There was also this that I'm going to test out. After all, I'm the ultimate lost cause here: 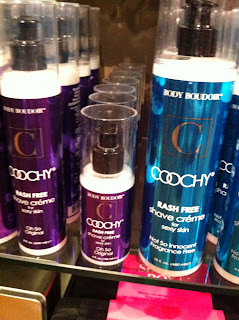 Also every type of condom you've heard of or wondered about, including flavored ones & Magnums. 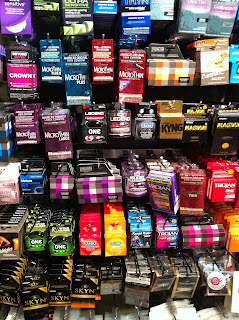 I also got some pasties so made sure to get pastie glue. Just seemed like a smart purchase: 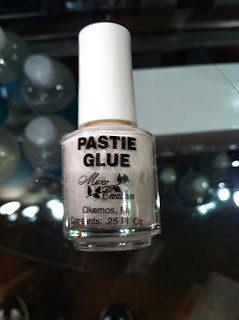 This stuff was really good. I did actually taste it: 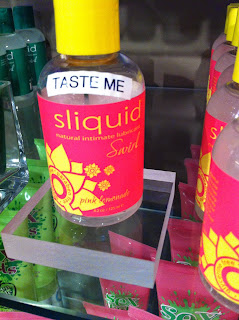 This just amused me. Maybe for the man who'll never get laid again (I have some theories on that): 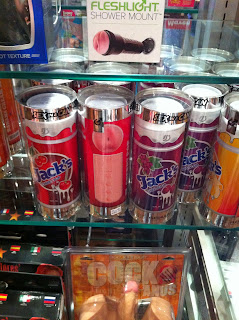 Lastly, they do have bondage rope here. The handcuffs were nearby but you might save some money getting this at Home Depot. It was $40 here; I feel like that's way too much. 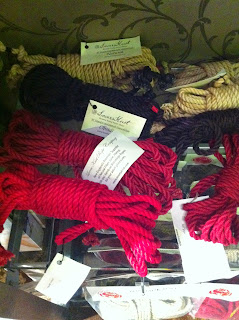 I had a lot of fun & like that they have everything you ever wanted + cater to all people, not just some of them. I saw all types of stuff here & that is how a sex shop should be. When I saw this penis clock when I went in college, I thought of getting that for my mother to see how she'd react. I bet it would be funny. Scandalizing uber-religious types; it's just so darn tempting.
Posted by Film Co. Lawyer at 4:10 PM