The Surreal Adventures of The Angry Redheaded Lawyer: "The Fight" by Jonathan Leaf at The Storm Theater Company

Jonathan Leaf's “The Fight” takes us on a journey with one Caitlin Schultz (Laura Bozzone) who is writing a doctoral thesis and a book on the feminist movement, particularly second wave feminism. She is seeking the answer to the question “What happened in Houston?” Doris Margolies (Judith Hawking) was all set to become the leader of the National Women's Political Caucus when suddenly, votes cast for her were simply not counted. Doris contends that Phyllis Feinberg (Fleur Alys Dobbins) along with a number of other women in the movement such as Bella Abzug were trying to kick her out of the feminist movement while Phyllis considers Doris a crazy, paranoid woman out of touch with the movement's brand of feminism. Per Caitlin, this is a story that hasn't been told and Caitlin is anxious to learn it. As we go on this journey alongside Caitlin with the narration of Doris and Phyllis, various parallels to the 2016 DNC primaries (the Sanders situation in particular) and the nuances of feminism (classic vs. third wave feminism) presented themselves.

Doris and Phyllis are formidable women in their own spheres, with Doris as our humorous straight shooter who lays it right out there contrasting with Phyllis's smooth, refined, cool subtlety. Doris considers Phyllis a hypocrite as well as a “phony” in her feminism since Phyllis had an abortion when she was young and solicited her millionaire boyfriend to save her women's magazine when it was in financial trouble. Phyllis is also the “fashionable” one and presumably better looking.

Meanwhile, Phyllis sees Doris as a stodgy, loud and out of touch liability to the feminist movement due to Doris's hostility towards lesbians, refusal to talk about minorities or welfare, continuing in a physically abusive marriage and elevating motherhood while looking down on women like Phyllis for shunning motherhood/traditional marriage. Caitlin herself seems caught in the middle as she reveals that she herself had some same sex relationships to Doris. 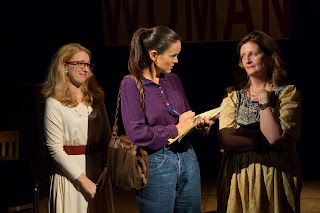 However, Doris doesn't belittle or insult Caitlin for this as she says she was never against lesbians or bisexuals but simply wanted the movement to be mainstream vs. a fringe movement nobody cared about due to societal attitudes in those days about gays and lesbians. She also reveals being uncomfortable around lesbians in that time, presumably because of being a traditionalist and not accustomed to that population.

Doris explains to Caitlin why Phyllis is the way she is and Phyllis eventually tells Caitlin just what happened in Houston.

Both Doris and Phyllis were very well developed, complex characters whom I could see a little of myself in: Doris for her admission of hitting her abusive husband back when he hit her and Phyllis for her fear of having a family due to the wreckage of her home life caused by her mother's mental condition. Their relationship felt like the typical clash of women where the traditional homemakers are battling against the career minded, the attractive are battling against the average or ugly, the mothers are battling against the childfree, etc. It was complicated and littered with shades of gray; they weren't friends or enemies or frenemies. Perhaps there is no one word description to describe the relationship between Doris and Phyllis. 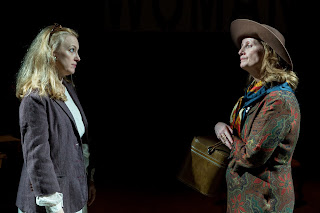 I had an interesting time trying to locate Grand Hall; a kind Asian guy outside the church where the theater is located directed me on how to get in (which I likely wouldn't have figured out without help since there is some maneuvering to get there). Once I did & learned that I was indeed in the right place, I discovered a space that was wonderful. It reminded me of a field trip I took to the Stevens Center in middle school. It was a space that was devoid of pretension but still very professional. It felt like a historic venue with character and intimacy where the acoustics were great, a space tucked away from the hustle and bustle of the NYC streets. The intermission and pre-show soundtrack was very fitting and clever in it's presentation (a series of girl power and 60's girl group anthems).

The costuming was wonderful, especially when Doris and Phyllis led us on scenes taking place in the past. It was impressive how Ms. Dobbins in particular looked so young when she was speaking with Stanley (Matthew Provenza) about her pregnancy. She absolutely conveyed youthfulness in that scene. 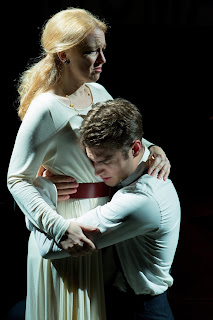 Our male characters (Mr. Provenza and Mark Quiles), consisting of various male figures in the lives of Doris and Phyllis were also good in their roles but the absolute standouts here were the ladies as this was their story.

You could also feel Caitlin's discomfort at times when she was interviewing Doris. It felt like Doris was poking into places Caitlin didn't exactly feel comfortable going to such as her revelation of prior lesbian relationships.

Of course, I can't convey enough praise for Ms. Hawking who played Doris. She definitely had an appeal and empathy from the audience with a lot of laughter after her lines.

This show, without question, is relevant to our times and perhaps even more relevant in light of the recent sex scandals concerning Harvey Weinstein, Kevin Spacey, et. al. I personally deal with plenty of those issues in my career and have had to block my fair share of cretins who seem to think this model is a bimbo who is clueless as to her legal rights or when someone is not interested in a business discussion. Jonathan Leaf conveys the nuances of female relationships and this experience of feminism in a truthful, engaging and enlightening way. I highly recommend this show and this venue.