Until taking high school English & learning about it, I didn't really appreciate the concept of symbolism. After that, I started to notice little symbolism stories in my own life. The absolute best one was when I lost the diamond ring I bought myself years before on the same weekend my then-boyfriend said he cheated on me. I think I told it before but if I didn't, I have to someday.

The latest one concerns my former childhood best friend. Maybe now we ought to call her a train wreck or someone TLC ought to be contacting with a contract for a reality show. From her latest antics, they really ought to. She's apparently managed to make one acquaintance who I felt ought to get a reality show w/her sister look functional by comparison (she's the one who had to fight to get a tubal after having 4 kids & limited means to raise them).

Many moons ago (or at least it feels that way), before she went insane my ex-friend gave me a pair of sunglasses. They weren't really The Angry Redheaded Lawyer's style (my style is very eclectic & different from the pack's) but I said "Thank you" and took them just the same.

If you read "The Wedding Saga" series here, you know that friendship has definitively been history for a while. But...it gets so much better.

Remember when I mentioned my sister finding out her husband had been having less than clean conversations with other women on Facebook? Well, guess who he decided to have one of these conversations with? Guess who responded to these overtures & said nothing to my sister? You got it, this ex-friend.

My sister, for God only knows what reason, decided not to tell this bitch to suck it or fuck off or drop dead like 95% of us would have. No, she decided to still talk to her though on a more limited basis.

Two thoughts occurred to me at hearing this:

1. My BIL could do so much better than ex-friend. If he were single, had no kids, dressed nicely & came to a fashion show, he could probably have a shot with a fashion model. I know them, you know. Plus, I have the wingwoman skills. Oh, hell I'll be a bitch & say it: this ex-friend was a size 22 at the wedding. I am (and was) a size 2.

Looking back these days, maybe my ex-friend had more luck with guys than me back in the day because she had fewer standards than me. I was picky, wasn't going to have sex with them & according to people I know (and even someone who reached out to my sister later), guys were intimidated of me & insecure around me being who I am. Older guys checked me out but I had no skill to pursue that and no one really pursued me until college.

2. My sister ought to be nominated for sainthood. The reason will be even more obvious soon.

Fast forward to this month: the ex-friend had the baby with her illegal fling who I guarantee isn't nearly as good looking as most of my guy friends & certainly not any male models I've worked with. She contacts my sister (AFTER the revelation of her little conversation with my BIL which my sister found out about & not from the ex-friend) to ask her to get a free bassinet my sister is trying to sell. This after she apparently owes my sister money from that wedding.

My mother apparently told my sister she was done with this ex-friend after the ex-friend showed her ass at the wedding (the incident referenced later in the saga & to which everyone who's heard that tale sides with me, including many impartial third parties). My sister simply opted not to return that phone call.

Apparently, ex-friend was around when my sister lost her first husband but I think that ex-friend used up the goodwill from that ages ago. Recently, we crossed 10 years since this guy died; I don't think you can do the shit she did & get to remain in someone's good graces because you comforted them when their first husband died.

As far as I'm concerned, the only thing my sister owes this ex-friend is not shooting her on sight (mostly so my sister doesn't have to go to jail). Anything else is fair game.

Now, for the symbolism. I started wearing these sunglasses & didn't really care if they got messed up or lost screws (as most of my sunglasses invariably have happen) since I was just using them in the meantime before wearing newer ones I got that are in keeping with my style. I had been wearing them for the longest time just because. Certainly anyone who saw me in them figured they weren't really my aesthetic.

A few days ago, I came home & had the sunglasses in my purse. I open them up to find this: 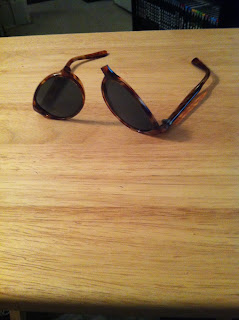 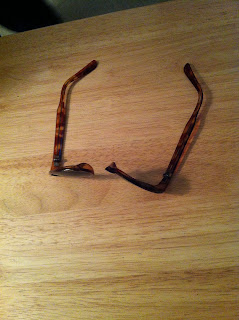 I have no clue how that happened. I wouldn't be able to physically break them myself, my purse had been closed when I discovered this & I'd worn them home a few minutes earlier. The cats didn't sit on them or my purse. I'm still puzzled over it.

I still have to get the screws out so I can save them or maybe put them into some other sunglasses in a style I like. I just think this is interesting. Don't you? Whose sunglasses break apart like that with no prior evidence of this?

This ex-friend is also a huge reason I'm selective about who gets to come into or stay in my life along with convinced that no one should get to stay in your life simply because they've been there forever if they no longer fit within it. Friends of mine certainly better know if they don't that they're in a privileged place & past goodwill isn't going to keep them around forever. Guess my sister got the whole saintly stuff when it comes to people while I got the "no mercy" gene.
Posted by Film Co. Lawyer at 4:13 PM