The Adventures of the Macabre Faire Film Festival

The day before my birthday, a Saturday during my husband's vacation from work, we opted to go to the second annual Macabre Faire Film Festival. I'd heard about it through some new networking contacts & a friend of mine had a film screening there. Never having been there, trying to encourage my husband to start networking (I was told there would be some great contacts in attendance)& with the prospect of comic book vendors being present, I asked my husband about going. Off we went.

The festival was in an area of Long Island where you'd better be very familiar with parking rules and the street directions. It's a bit like New Jersey since there are some one way streets and bizarre laws on parking (apparently, in Rockville Centre you can't back into parking spaces). I was scared parking would be way too tight & we'd never get a space once we took our planned meal break to Moe's Southwest Grill (a long awaited planned destination we didn't really get around to actually following through on until we saw the Undercover Boss episode from the night before where the CEO of Moe's goes undercover).

Mercifully, parking was just fine on Saturday. We got to the venue, had no problem with the hotel staffers (in some places, you find people who aren't friendly to the convention attendees or workers), got our bearings & started talking to folk.

We weren't in costume but there were a few people there who were. The Freddy Kruger was quite authentic; he took a shine to me, I think. I even referenced to this in my interview (yep, I got interviewed as mentioned a couple entries back; see it if you haven't).

But one thing I absolutely had to get when I saw the vendor room was a creepy stuffed animal. These are now in my parcel of stuffed animals: 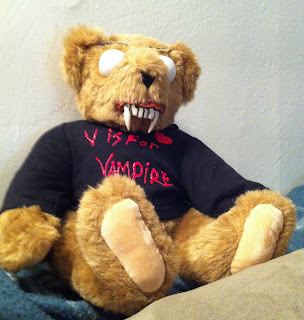 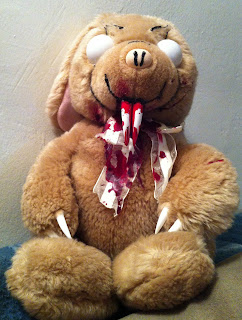 I noticed the bear right away & even said "I've got to get that!" Then, when my husband was going to the car or in the bathroom or something and I was looking at that bear I saw the bunny & knew I had to get it.

When my husband saw the bunny, he said "The bunny will keep the other stuffed animals in line."

I have a giant flying Paragoomba from the Mario series my husband got me, a stuffed black Yoshi (because I'm not going to get a green one like everyone else & we all know Black Yoshi kicks the most ass), even a stuffed Oswald from "Epic Mickey" (since Oswald hasn't gotten love in the Disney merchandizing scheme). I even have a Minnie Mouse I got from Disney World proper where she looks like a goth cheerleader & a swear bear (those bears who have buttons you push where you hear crude things)!

I will also do voices for stuffed animals if I'm feeling like it. I went to a comic book store with my husband once. We'd recently cleared out his stuffed animals & he had this red bull plush. I notice a black & white spotted cow on the shelf & decide to have it say crude things about mating with the red bull he has at home. Apparently, I annoyed my husband enough with that that he decides to buy it. I told him he didn't have to since I was just having fun & amusing myself. He wouldn't hear of it & now it sits in my stuffed animal collection.

Awesome vendor who sold me the animals. I got a good deal on them since I couldn't choose between them & I was told they are custom made. The bunny actually looks like the evil side of a stuffed rabbit I got one Easter that's totally adorable. I wish I could find their name but I haven't had luck right now since I think my husband threw out our program schedule & vendor list.

However, my cat is definitely more adorable than any stuffed animal & is just as vicious. You should see what he does to our socks! The husband says that his bitchy ex, who collected Beanie Babies (I own some but never collected them since I only got the ones that appealed to me instead of chasing down all the ones from foreign lands & paying a fortune for them like she did; or rather, she had my husband bankroll those purchases), would yell at the cat for playing with those Beanie Babies. Apparently, he told her the cat was being a cat & you don't leave your stuffed animals near the cat. I don't & I wouldn't yell at him for playing with them. I'd have to yell at myself for leaving stuffed animals or anything I cared about in his reach. He's also too adorable to stay mad at for very long, at least to me. My husband & others say our cat is evil but loves me since he recognizes his own kind (not sure if he means the redhead or lawyer part since he tried to bite both my redhaired sister & mother when they came to visit; I think it was my dad who said the cat tried to bite everyone except me).

Since we were there for the day, we also watched a few short films. The features were conflicting with other films we wanted to see & we only had the one day since the next day was my birthday. I heard different things about the other projects from my friend & others I spoke to later who'd seen them. We were unfortunately in the room where a lot of technical issues were happening. I learned later they got worse after we left to watch films upstairs & talk to people.

One thing you should know about horror films, at least the ones we saw: there was a LOT of vomit. My friend's film The Nowhere Room was a welcome relief from the onscreen vomit we saw most of the day. It was also deeper than the other films we saw so if you had the chance to see it, then you got a real treat. However, there was one film we saw that was available for purchase & my husband bought it called No Clowning Around. My husband will eventually write on it so I'm not going to go into details here but it's definitely unique, creepy & has a puppet in it.

Overall, it was a lot of fun. I did look at the other vendor booths but couldn't afford much. There was even one that had chain mail stuff. I'm shocked my husband didn't ask them about the price of a chain mail bikini since he's said he wanted to get me one; he said he researched it, though, and that they're too expensive.

My husband even told me he had fun. I definitely found it better for networking since the people there were polite & approachable. I didn't feel that at Comic Con in October; Comic Con, for me, was just about buying stuff. My husband swears he will not attend on the Sunday this year since that's the same day as our anniversary. I'll believe it when I see it, though since most of his friends go on that day with their hard-earned money since they can't afford to go the other days b/c of work or crazy crowds.

Now to watch Anger Management. If you've not seen it, you should. It's the only sitcom I've seen that didn't go with the same old sitcom tropes. The writers really deserve credit for showing a functional friends with benefits relationship where the woman hasn't developed warm, fuzzy feelings for the man. I also like that Kate is a childfree woman instead of some baby hungry, man crazed maniac like nearly every other sitcom character (and you wonder why my husband calls them "shitcoms"). You have to give Charlie Sheen credit for this show; I certainly don't condone everything he's done but I do have to respect him for conceiving a show that violates the typical sitcom tropes. I don't want much in the way of new shows but this is one of the few we like.
Posted by Film Co. Lawyer at 9:50 PM