So after some wrangling, I've gotten my first event as Subcommittee Chair on the calendar at NYCLA. It's going to be on March 4th at 7 p.m. & if you register, you too can attend. However, I should warn you that we currently have over 100 people registered for it. Thank the awesome draw of Jagger Kaye, Monroe Mann & my awesome team of speakers.

Jagger is a guy who is the antithesis of the average speaker at any bar association so when he ran with this idea & offered to get me speakers + moderate, I had to take him up on it. My goal in having a leadership role in a bar association is to do something different & make the place accessible along with relevant to our population. Since my realm is creatives & this is something that has actually happened in the course of my work (people have asked me to be their managers even though I own a film company & feel me doing that would lead to inevitable conflict of interest issues in duties to client vs. duties to my company), I felt it was time we had a forum on this issue.

Maybe I would have been more tepid in my quest to do something different but since Jagger put it out there, I thought "Not only can I start my tenure in style & build a name, I can open the doors to getting more fresh and different events in there." I demanded my participants to be themselves. I'm always myself when I go to any of the bar associations so I feel like it's more of "Accept me, accept my peers/friends/contacts."

Plus, I have some very well respected people for this that my legal colleagues wouldn't necessarily have been able to get. If anyone knows what an agent or a manager does, it's an actual working agent & an actual working manager. I've seen too many events with lawyers where no one went to the source & that's always bothered me. Who's going to be better at talking about the actor client than Jagger, who is also a working actor? I also ended up getting a great resource to talk about the producer client who is an actual working producer (along with a well respected casting director).

I'm also starting with my friends/allies & picked them specifically since they deserve to have this audience. Lawyers tend to be a hot commodity in the entertainment field & the lawyers trying to work in this industry often have a hard time finding the creatives. I also think lawyers aren't the only people who can teach a lawyer something. I've learned plenty, especially about the entertainment industry, from people who weren't lawyers but actually are producers, actors, agents, etc.

For me, it's important to go right to the source if you want to know something. Sadly, that's not how I've seen many parts of the legal community working. If I have anything to say about it, that is going to change.

For instance, I don't recommend resources for entertainment law when the people involved care more about the lawyers' law school GPA & whether they were on law review than if they have any real experience in the field and can talk to the creatives in a way they respect. I like my creative contacts way too much to do that to them.

Hopefully, I'll bring in the lawyers who hate bar associations & wouldn't bother with them but see my events and like them. My speakers certainly won't be boring & I know they care about this. That's another gripe I've had with events: you can tell the difference between someone who really cares about being there & someone who's just phoning it in. If you're passionate about something & great at expressing it, you'll make people care even if they don't know what you're talking about or could care less about your subject.

I saw this happen once in a college class when an economics professor was speaking on an economic concept. I didn't know anything about it & economics is definitely not a topic most people consider interesting (I definitely don't though I understand it in general terms). However, this guy was very passionate about it. The way he spoke made me care about what he was saying. He was also a very well regarded & liked professor.

So we'll see how this goes. I think it will truly be epic & if I get my way, it will be a game changer for everyone. Also, hope people will listen to me when I do more events & trust my choices for speakers. I actually created the event title since I'm trying to show the informality of this business, my speakers & me as an event planner. Professional doesn't have to = stuffy or boring. We can have fun as well. I'm not sure there's anyone who embodies that more than Jagger in terms of a moderator.

On another note, I saw this outside the subway station when I was going to a karaoke place in Brooklyn last month: 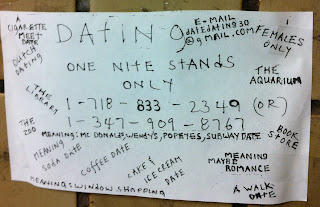 A few comments to be noted:

1. My husband says "The library is not for dating!" Nope, it isn't. Don't you dare try that nasty mating stuff in there! He's busted people for that & apparently told the mostly teenagers who do this that if he can't do it there, then they can't either.

So our note writer might want to pick another place for dating instead of the library. Many of those people are perpetually on the layoff list, have no social skills or aspirations to move onward & really hate their lives since they work for tyrannical assholes who make proclamations on high about when to close in the event of bad weather but keep their butts inside their warm mansions while demanding the "peasants" to risk their lives to get home in blizzard conditions.

Don't make things worse for your library staff. You try "dating" there at your own risk; don't say I didn't warn you if you get beaned with a heavy book, splashed with a hose, smacked upside the head, have your ear ripped off or live some other painful consequence.

3. This seems like an awesome thing to do to someone you know who refuses to put in any effort to get a date but bitches about how (s)he doesn't have a significant other or even a friend with benefits. If that fake online dating profile or Craig's List personal ad doesn't work, I'm sure this could do the trick. You just want to watch out for those random homeless people & crazy folks that live in your neighborhood. They're a dime a dozen in NYC.

4. This is not someone with an education. I'm not trying to be elitist here, just honest. Do any of you educated women read this & think "Gee, this guy sounds awesome! Let me drop my drawers for him right now."? I could see some high school guy with this, maybe even a guy in college but if it's a 40 year old? You'd conclude he failed at life. Even a 30 year old doing this has probably failed at life in some way. Educated women I know of would want to go to an art museum, at least eat at Chili's or some nice sit down restaurant where you'd tip the wait staff, maybe even a bar for karaoke or cocktails. You certainly won't get the vegetarian and vegan crowd by going to the fast food places.

When I saw this, I not only laughed but suggested my husband do this for those socially awkward misfits he knows who complain about not having a woman but refuse to go anyplace where I or other women will be present. I may be attractive but I pointed out that they shouldn't be fearing me since I'm married & my husband's their friend. Plus, my husband has threatened bodily harm against guys he knows for even thinking about having an impure thought about me.

If any of you choose to contact this guy & go out with him, tell me how it goes. You have to wonder about someone who creates such a flyer. I mean, did the person do it himself or did someone else do it b/c they were sick & tired of some socially awkward or undesirable friend complaining or being a third wheel in their lives? Do it safely, though. Bring your friend who works as a bar bouncer (assuming you've got one).

Another thought: if this guy is a sexual predator, he's the most inept one I've ever seen. A really effective sexual predator would tell you about his villa in some warm, island location, how much money he's got & how he's going to shower you in diamonds and furs. He'd also have to mention his occupation & basically make sure to read some issues of Cosmopolitan to figure out just how to attract the maximum number of attractive women. I'm sure he'd also be making sure to be wonderful in bed so he could create some powerful cult where he controlled everyone with sex.

Say, wouldn't that be an interesting way to run a cult? You'd better be like that mega-perv I went to school with & have a ton of Viagra if you're getting on in years but I'm sure eventually we'll hear about some cult run by a guy who controlled people with sex. A tactic like this would also be a novel way to pick up recruits, don't you think?

Now, I'm going to sit in my apartment, watch the snow fall, stay warm & amuse myself in varied attempts to avoid the onset of cabin fever.
Posted by Film Co. Lawyer at 8:08 PM