Not Sure Whether I Should Laugh or Cry

Is Wal-Mart's marketing department totally stupid or completely arrogant??? I have to wonder since we got this today: 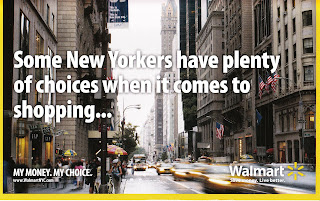 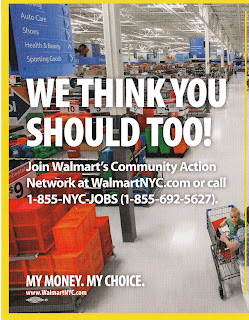 Okay, morons! My husband is... a union member. You forbid unions!

Anyone see the irony here? This is like sending a membership application for the Ku Klux Klan to a black person. I had to write a response to these idiots & their website propaganda claiming that 75% of the city favors having a Wal-Mart here. Ha!

I've been to many a Wal-Mart & I don't support a Wal-Mart in NYC. Crippling small businesses, their anti-union stance, disrespect to employees, carrying dead peasant's insurance & basically epitomizing the ultimate shitty employer. What is there to like??

Yes, things in the city are too expensive & yes, there's some crappy small businesses but that's why we have a little thing called Yelp. Nail these cretins on bad service & shady dealings, tell the public, don't continue to patronize them & they'll lose business. Funny the media & everyone I know says "hell, no" to Wal-Mart in NYC. Why don't we just tear down every piece of history & uniqueness in NYC then have people poop on the remains?? Bring a Wal-Mart here, the bastion of suburbia, and you may as well do that. Not to mention all the legions of trashy folk who hang around Wal-Mart & the stories of violence in the parking lots; gee, does NYC needs more violence or people on welfare???

I would rather be a hooker than work at a Wal-Mart, I have that little respect for it as a company. Yeah, like I had respect for most companies to begin with but that's beside the point.

Seriously, if a black person gets a membership application from the KKK, I'd like to hear about it.
Posted by Film Co. Lawyer at 1:58 PM