The Surreal Adventures of The Angry Redheaded Lawyer: "Antigone" by Jean Anouilh Presented by Fusion Theatre

This was actually my first time going to an opera of any type. Most of my exposure to culture came from going to a local theater in my town as a child for school field trips and some field trips to cultural centers in my hometown. Perhaps my first significant exposure to opera was meeting lawyers at one of the bar associations I belonged to who can actually sing it and did quite well at it. So in short, I am not a lady with Italian language competency or any real qualification to evaluate opera in a traditional sense as someone with knowledge would be able to do. 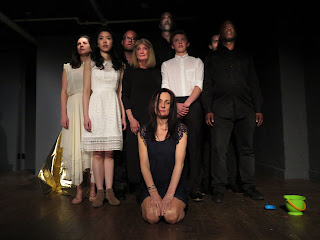 Fusion Theatre, whose mission is to strengthen classic plays with the great art of opera, will present Anouilh's "Antigone," enhanced by sung selections from five classic operas, May 17 to 28 at The Studio Theatre in Theatre Row, 410 West 42nd Street, directed by Eilin O'Dea. Antigone Cast

I came to “Antigone” with some familiarity of the classic story but never having actually read the play, either the Greek play or Jean Anouilh's adaptation. I also wanted to go to an opera and figured a show combining opera and theater would be an ideal format for me. 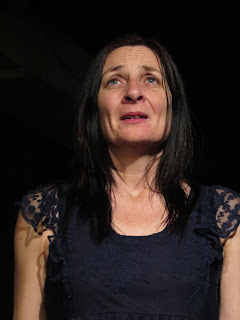 Antigone (Eilin O'Dea) is a young woman of royalty who lives in the palace with her sister, Ismene (Allison Threadgold). Both are the daughters of Oedipus, the former king who was slain in battle. His brother, their uncle Creon (Paul Goodwin Groen) is the new king. His son Haemon (David Grant) is set to marry Antigone (this is the royal family in Greek times so that sort of marriage is the normal course of business in this place and time). 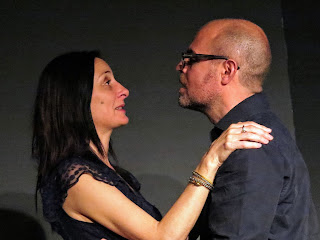 It seems Antigone's life is all planned out but there is the pesky business of her older brothers being slain in battle in the face of turmoil in the kingdom. The brothers were to share the throne but the first one placed by Oedipus refused to give up his throne when it was time for the second brother to reign. Creon, for the sake of practicality and getting things back in order, decided to honor one brother while leaving the other one to rot and be picked apart by the birds vs. getting a proper burial and funeral rites. Furthermore, Creon has declared that if anyone attempts to bury the disgraced brother, that person will be sentenced to death. 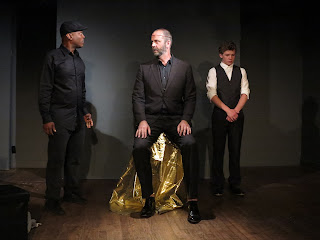 This does not sit well with Antigone since she feels her brother deserves a proper burial regardless of the law and the need to restore order to the kingdom. With full cognizance of the consequences and the urging of Ismene not to do it, Antigone reveals that she has already attempted to bury her brother. 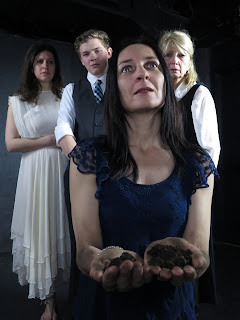 Foreground: Eilin O'Dea as Antigone, holding dirt from the burial of her brother. Behind (L-R): Allison Threadgold as Ismene, Igby Rigney as Page, Sue-Ellen Mandell as Nurse. Photo by Jonathan Slaff.

Creon, being caught between his own law and love for his niece/future daughter in law, tries to hide her involvement in the crime despite her being seized by the guards watching over the body to avoid illegal burials. 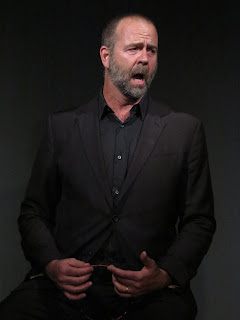 Antigone refuses to comply. She insists that the burial must happen and if she can not accomplish this and receive her proper punishment for doing this, it is not worth continuing in her life. She stands by her principles regardless of the price and later revealing her fear and uncertainty to the first guard who discovered her (Byron Singleto). 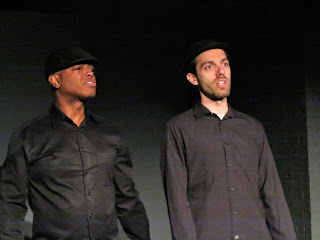 Haemon, the man she is betrothed to who loves her dearly, insists that if Creon kills her Haemon will die as well and we learn later that he's joined her in her tomb and killed himself when Creon discovered him.

Many positive things can be said about this show and its performance: there was a diverse cast, which worked very well since the story itself is universal and the casting did not feel forced or coerced but seemed natural. I also like the sparse staging and limited props used to tell the story since the show wasn't overblown or fancy like some performances might be. This had to have put pressure on the performers to be top notch. Fortunately, they were. When Creon is doing his piece after Antigone has refused to let him cover for her, you can see him crying. The first guard, Antigone and the messenger (Paulina Yeung) also have songs and all were great at conveying their respective character's feelings, emotions and/or the story through their work even if you didn't know the Italian words. 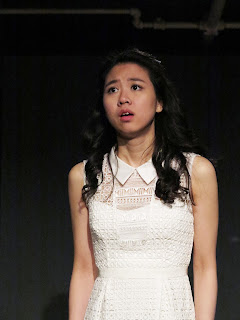 This performance was held at the Studio Theater on Theater Row, which is a great place to see a show in the summer since there is air conditioning, a precious commodity in New York City. The theater was also small enough to be personal and the seating was set up in a way where everyone could see the show regardless of what row they sat in.
Posted by Film Co. Lawyer at 3:41 PM