Cats: Why They Are Awesome & I'll Take a Kitten Over a Baby

Once again, real life has interrupted my updating this blog. A friend of mine that my husband hates got sworn into NY on Wednesday & I volunteered to go since no one else was (plus it was a simple subway ride for me to get there). I felt bad since I know what it's like to do things in life & not have anyone be there for you or even just dismiss your accomplishments. He got motioned in but I still felt it was something that warranted someone showing up for. I'm still the only person in my entire family (including extended and in-laws) to have taken the bar exam, much less be an attorney. Motioning in or not, it's still a bigger deal than putting on your clothing all by yourself in the morning or walking to the street corner (assuming you haven't suffered grave personal injury that would prevent you from doing this already).

I even altered my normal sleep schedule to do this & wore makeup (since a swearing in is always at the courthouse, where you're expected to look nice & I didn't want to go with zits showing on my face). I doubt my friend cared but it was one of those girly isms of not wanting to look totally sloppy.

The only person who came to my CT swearing in was my husband & he's been the only one to go to my company's events. I'm not even sure my family would attend even if there were a screening of one of my films in their town or nearby.

On top of this, my father got into a car accident on Monday night that totaled my first & only car (the one I used while living in Atlanta and CT; I guess a 10+ year run isn't bad but still). He ended up getting a hairline fracture near his knee, has to do physical therapy, is out of commission for a while & my family's got enough shit going on already.

THEN, we've had this stray cat in our neighborhood that is super affectionate. On Monday evening, when it was snowing & cold outside, I came home to find this cat in our apartment entryway. I was puzzled about it but my husband said he felt bad for the cat & that he could no longer watch her suffer outside (particularly since our neighbor saw an issue with the cat's leg & I said we'd have to take in the cat if she were injured or in danger of being abused if she stayed out). He was going to take her in that night in a carrier we'd planned to get rid of since it inspired terror in our cat but the cat got outside before he could.

On Thursday, he got the cat into our house. The scary thing is that cat went right in the carrier & later was sleeping in it. I've never seen a cat be cooperative with one of those & I've had cats most of my life. You can tell this cat is STARVED for affection. She's currently in our bathroom until we get her checked out by the vet on Monday. We found a local one with acceptable reviews to me that exclusively does house calls. I don't want my cat getting sick or harmed b/c of my husband's pity for this stray cat.

If we keep her, we'd also have to get her declawed since our current cat is declawed. I'm not a proponent of doing that since it hurts cats to do that to them. However, it's not fair to put a clawed and declawed cat together. My cat also has a history of hating other creatures (though he loves me). We're trying to see about getting her a home but anything we're going to do is essentially on hold until the vet sees her on Monday.

At least we did pick out a name for her: Ortensia. If you figure out the reference, you get 100 points. I looked at her after hearing this name suggestion & thought "She DOES look like an Ortensia."

What do you think? 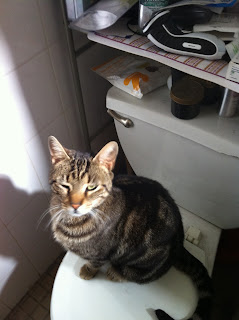 Our bathroom is essentially a closet but it seems to be working for her right now. Here's another shot I got of her where she's looking up: 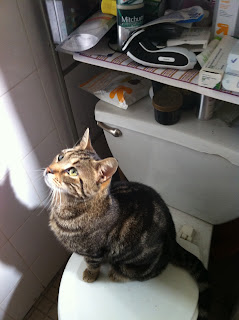 This cat is so extremely affectionate that you can tell she belonged to someone before. I also don't think she was treated well based on what we've seen her do & how she treats even basic affection and attention.

The alpha cat has not been around Ortensia so much b/c of safety but he knows she's there & he can't go into his bathroom. She also doesn't drink from the sink like he does.

From what we hear, apparently some tenants who lived in this building abandoned this cat & moved to Virginia. My husband plans to pay a little visit next time we're in that area.

If this cat actually belongs to someone, they are the biggest deadbeats around. The cat has NO collar (well, didn't but we fixed that), was being fed by others who took pity, kept trying to get into our building & for fuck's sake, THIS IS NYC!!! You don't let a cat roam outside when you're living in the city & surrounded by a bunch of apartment homes with no front yards but a busy street and sidewalk. She doesn't even appear to have a name since she responded when noise is made or to general greetings like "kitty."

When it comes to cats, I'm very passionate about decent treatment to them. After all, they kill mice (how many kids have you seen doing that?), kill & point out bugs, eat some of this stuff they kill, don't have to be walked (if you're too lazy to clean a litter box, you sure don't need to have children & change dirty diapers) and they don't play mind games with you. If a cat doesn't like you, they don't pretend and then gossip about you behind your back like a human would. They're not racist, sexist or ageist.

As long as you're nice to them, maybe give them a treat from time to time, they'll be your buddy. Kids certainly aren't that way; you can be the nicest, coolest parent out there & get rewarded with nastiness, ungrateful behavior or other various shitty treatment. Cats are a trillion times easier. Maybe living up to childfree stereotypes but I totally prefer cats to kids per capita. Individual factors definitely play a role but if you gave me a choice, I'd take a kitten over a baby in a heartbeat. I actually know something about caring for a kitten.

When I say I'm "very passionate" about proper treatment of cats, I mean that I could probably get off on violence against an animal abuser based on temporary insanity. Let me tell you a story to illustrate this.

My ex-friend decided to take in a stray that was hanging around her cousin's beauty salon when I was staying in her home after graduating college. I helped her out on this.

Her husband came home & kicked the carrier after arguing with my ex-friend. I was in a different room at the time but could see & hear the action.

The instant he did this, I zoom over to him and stand right in his face literally robbing him of personal space. Seems I scared the hell out of him. It was 100% instinct. Any social cues or niceties left me when I saw that since it pissed me the fuck off. I think it took less than a second or two for me to get there.

After that, he was far nicer to that cat.

What's the lesson? Don't fuck with me when it comes to animal abuse. This includes ditching your cat b/c you decided to have a baby.

Guess what, fuckers? My sister and I were raised with multiple cats around us. We were taught to be respectful to the cats. My parents would not have dreamed of getting rid of any of our cats because of having a baby. My sister currently lives with my parents and her small kids; she hasn't even dared asking them to get rid of their cats to cater to her little kids. Nope, her kids have to actually treat the cats with respect & she bothers to PARENT!

By 5/6 years old, we knew how to properly hold a kitten & not be fucking assholes to them or any other conventional pets. We didn't die & the Earth is still turning. I'm doing what I do now so obviously you're full of crap to go tossing pets out like they are an old TV set or a bed that broke.

Being abusive to an animal tells me that you are a sub-human piece of garbage who is not entitled to the same rights the rest of us share. Therefore, what does it matter how you feel or what you think? I don't give a damn since you find it awesome to be abusive to dogs & cats. I also feel people like that have zero business breeding. What will they do if they have a baby who cries all the time or has a neurological condition? Are they going to just toss that baby in the dumpster b/c it became "inconvenient?" If they think it would be monstrous to do that, then why the difference to a cat?

For me, if you think there's a difference, you are a scumbag & have mental problems. The irony here is that apparently sociopaths have more regard for animals than human beings. Tony Soprano cared about a mistreated horse about as much as I do about cats.

I don't give a shit about your financial condition. Would you leave your kid by the side of the road b/c (s)he was too expensive? Then why is it okay to leave a cat, a so-called member of the family that formed a bond with you & whom you've put money into? If you had it declawed & you're doing that, you are right up there with an adult who exposes kids to known child molesters, pimps, rapists and any other "bad element" that would rob that child of his/her soul, physical being, etc. My parents don't have money either but they'd never abandon their cats. This was also true when I was a kid living there.

Am I a sociopath b/c I care more about cats than humans? I don't know. If I am, I'm no worse than any other person in my position or field. Plus, I think how one treats the lesser of us shows how much character someone has. Someone who's shitty to a dog or a cat? Tells me you're a person I'll be avoiding & balling out for being such an asshole. Character transcends social class, race, age, everything. It's something you have or you don't, much like class.

If my feeling as I do about animal abusers makes me a sociopath, then I'll wear that title proudly just as I wear it proudly than an ex (who was also 14 years older than me) said I had the capacity to be Livia Soprano.
Posted by Film Co. Lawyer at 3:19 PM