So, here I am again reviewing another fashion show. I was happy to get this one since this happened to fall on the 4th year anniversary of my father's death (see this from 2013 if you're that curious). I thought my friend who did the photography for the last show was going to join me on this one but he bailed on me and until telling me the reason DAYS later, I was pissed at him. You know, friends aren't supposed to be making your bad days even worse or leaving you to handle multiple complex tasks at once. He's someone I love like an irritating little brother who will be a great man once (if?) he grows up mentally.

So left to my own devices, I did the best I could on pictures (since a professional always carries on) but there were professional photographers in attendance who certainly got better shots than I did as a reviewer. Let me tell you, trying to watch a show with a critical review's eye AND take photos can not be done simultaneously. You've got to do one or the other & that's just all there is to it.

Going through what I got, I did my best to crop/retouch the best shots and show you enough of what was presented to give you context.

This show took place at the Skyroom. Skyroom is a venue I know very well; the doorman even knows who I am, I've been there that much. I have been to Skyroom as a model, as a spectator, even as a fashion show judge. Thursday nights at Skyroom is probably akin to my “Cheers”; I've made industry connections, gotten picked up by guys, made new model friends, gotten cheered at by name when walking down the “runway” on the rooftop floor where the shows are held, once witnessed a fight backstage that security had to break up (fortunately, not anyone connected to the designer or producer I was working with), and even got recognized in the elevator by other attorneys who saw me in my day job. Some Thursdays I've gone there thinking “I could get any guy in this place” but I'm never going to make the first move since I'm old school and way too terrified of rejection. 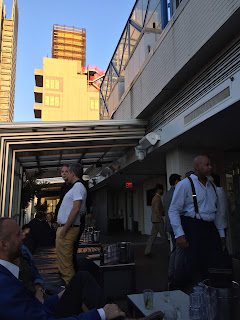 Using the Skyroom facilities for a fashion show is something of an art at times; you will want to bring things to put over your designs if you don't have a separate changing area for your models since there is no bathroom to use that will not put you out in the middle of the venue where others can see the clothes. The lighting is not ideal for hair and makeup once the sun goes down; anyone who has done a show there in these capacities can tell you stories but fortunately the staff is pretty nice from my own experience. Outlets can be a precious commodity as well. Be resourceful and plan accordingly if you are doing hair or makeup.

I arrived at 7:30 to get a good seat and wait on my friend, who was supposed to show but didn't. The rooftop floor is really nice in daylight; there was a random event going on and I wondered “How long will I be sitting here before some random guy approaches me?” 17 minutes but the good news was he was polite and not a jerk towards me though he wasn't my interest. One night I actually did meet a guy who was my interest and this ditching friend announces his presence by swiping my cell phone out of my hand while I'm trying to show this guy a specific modeling pic I'm trying to find on my Facebook page. My friend's then girlfriend, who got into some shows at Skyroom based on my introduction to one show producer I was working with at the time & was also present that evening, was much more polite.

See why he's the irritating little brother I didn't ask for, don't have & kind of got stuck with?

The show began in a swoop and a flourish, as they always seem to at Skyroom. When you are modeling, it's usually “get out there, show your outfit and keep it moving.” It's even harder to make your brain pause here since the music is usually fast, it's dark and there's a fair amount of people you sense may get impatient if you hang around too long. I did my best to get shots but those ladies moved FAST. I appreciate the ones who paused some, which is why you can see some of these good sideways shots. 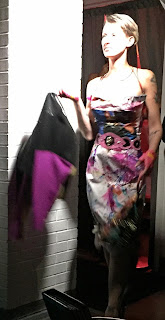 I loved this blue dress; it was my favorite piece in the show though I definitely felt this was a great collection overall.

The design for the dresses and certainly for the accessories is very unique, as I said in my previous review of the bird brand it reminded me of Betsey Johnson in its aesthetic. I'm not sure I could pull of all of these looks but I definitely like the blend of classic and modern that comes in, the sexy blended with the classy that would make these dresses appropriate for venues outside a typical nightclub where short skirts and miles of cleavage reign supreme. I definitely felt the blend of a floral print with the striped skirt was innovative and a risk I wouldn't have considered attempting myself. 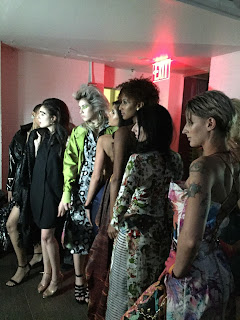 Accessories were by Joy Vay, which you can see some of in these pics (hopefully). A seamless pairing; I'm not sure who came up with that but it works very well. The black spiny bag reminds me of something you'd see in a Mario game.

Random fact: I played a LOT of Nintendo in my childhood and my mother would tell you I make a lot of games look easy. I've beaten many a Mario game on various Nintendo systems (though I've opted out of anything post Wii). Getting a Wii from my family after my evil ex absconded with the one I had played on was me regaining a piece of myself that had been lost since now I can play video games on that Wii.

Clearly, Leigh Grahill is a versatile designer who some professional women should talk to if they were looking for something unique and different to wear to a business function. She definitely could be the go-to designer for dressing female entertainment lawyers since we are supposed to be cooler than all the other lawyers & blend into the creative scene; at least I personally strive for that since nobody ever thinks I'm an entertainment lawyer unless they speak to me and I consider myself a person with a fashion sense.
Posted by Film Co. Lawyer at 7:29 PM