The Surreal Adventures of The Angry Redheaded Lawyer: "An Italian Miracle" presented by La Mama with the works of Dario D'Ambrosi

On December 12, I had the pleasure of attending this event which was an evening of performance, film screening of the works of Dario D'Ambrosi and a New York City introduction to “The Integrated Theater of Emotion.” “The Integrated Theater of Emotion” is a university level program for mentally disabled people created by Italian actor/director Dario D'Ambrosi, who is also the founder of a theatrical movement called Pathological Theater (Teatro Patologico). The program itself is for people with mental disabilities such as schizophrenia, autism, Down Syndrome or catatonic to academically and professionally participate in careers in theater arts in all aspects, not just the acting realm. 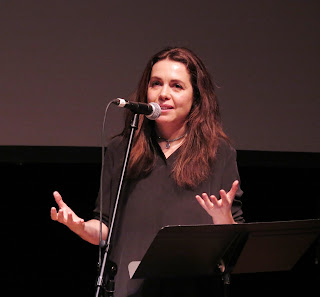 At La Mama December 12, Actress Celeste Moratti served as interpreter at "An Italian Miracle," an evening of a performance, panel discussion and film screening, to introduce New York to "The Integrated Theatre of Emotion," a university-level program for mentally disabled people that has been established by Italian actor/director Dario D'Ambrosi. Photo by Jonathan Slaff

The panel discussion planned for this event was not able to happen due to the Italian government officials who'd planned to participate being unable to attend. Nonetheless, this was an immersive evening and very educational on the whole. The food from Serafina Restaurant was also delicious, as I figured it should be. I remember walking by a location near the Westchester Supreme Court, seeing a sign they had regarding giving your mate the gift of a meal there & “she will love you forever” and being reminded of Quinn Morgendorfer from the '90s show “Daria” always trying to get guys to take her to Chez Pierre (a pricey place in the fictional town of Lawndale where the show takes place, presumably the most expensive place in town); I even posted a picture of that flyer on Instagram and remarked that Serafina is apparently the Chez Pierre of White Plains.

The first presentation we saw was scenes from “The Buzzing of the Flies,” a play by Dario D'Ambrosi with Greta Scacchi and Giorgio Colangeli. This is a story about a group of scientists and psychiatrists trying to return folly to the earth, in order to fight boredom and depression that has resulted from a world where madness has been eliminated. A SWAT team is dispatched to capture 3 different crazy people: a temperamental painter whose wife and child have left him (Franco Brunelli, whose son is introduced at the beginning of the piece seeking answers from the lead psychologist involved in the project), a child who lives in his own mind and wears headphones and a gifted piano player whose gift was suppressed by his family and spends his time counting the butterflies he mentions to a member of the SWAT team sent to retrieve him.

Scene from "The Buzzing of the Flies" by Dario D'Ambrosi.

Eventually the trio bond and we learn that one of the scientists at the facility (Dr. Natalia) also has a mental disorder she has shielded from her colleagues and superior. She thinks it's wrong to “amp up” the trio's psychoses to drive them over the edge for the sake of this “experiment” and helps them escape from the institute by running away instead of committing suicide as they'd originally planned after the “treatment” designed to serve as a form of “therapy.”

There was also a live presentation of the “Integrated Theater of Emotion” university course and a screening of “An Italian Miracle” to illustrate to the audience what this program is all about.

Finally, we were treated to the film “L'Uomo Gall – Days of Antonio” by Dario D'Ambrosi with Celeste Moratti, Luca Lionello and Dario D'Ambrosi. Antonio is a boy from a poor rural province outside Milan who was born mentally handicapped and with one leg shorter than the other. His parents banished him to live in a chicken coop, where he considered himself a rooster and acted as a chicken. Eventually, he is taken to a psychiatric hospital where he tries to live a more normal life. His roommate, played by Dario D'Ambrosi, despises him at first but eventually grows to feel empathy and affection toward Antonio despite Antonio's not living up to his standards of order and cleanliness. The group of characters we meet at the hospital include one actress who was in attendance for this event. She played Antonio, the boy who thinks himself a rooster. This film takes places in the 1920s though I was reminded often of “One Flew Over the Cuckoo's Nest.” Specifically, it felt like “One Flew Over the Cuckoo's Next” times a million in the anguish and badness factor. There is no way you'd get away with doing a film like this in the US and the atrocities you see Antonio go through leave the viewer not being able to help but feel empathy for him. However, there were also light moments in the film such as when the patients are taken to the beach and the girl who's always naked and drawing on herself with lipstick goes right into the ocean sans clothing and feels “right at home.” 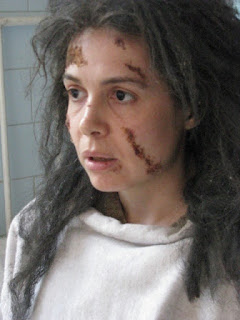 I know nothing of the culture in Italy with regard to mental illness but from my understanding of these pieces, it seems many people are confused about it and perhaps also in denial about it. It also feels like there is an element of shame to mental illness which is definitely still present today though it might be more subtle than in earlier decades. Granted it's not like we can say the United States is highly evolved on the subject for a second but I wonder how the perception of mental illness in the US vs. Italy differs and whether one country treats those will mental illnesses better or worse.

My own nephew is autistic and my sister says she doesn't think about what his future is going to be. He is also very high functioning and has gotten some good resources where he lives despite living in a smaller town and state than where this program is offered in Italy or where there are more funds for autistic children like New York City. She deals with his own outbursts and not being able to communicate with him sometimes along with plenty of people not being understanding of his condition. Some relatives outright told her he couldn't come to events or visit because of his autism, which has caused a lot of issues with people.

From what I heard about this program and its aims, which is not to put these people in straight jackets and force them to adapt to society but to use their outbursts and differences in the theatrical arts in order to employ them in a positive and more pro-social way I think it would be great to have something similar in the United States. The aim is not for the students to have talent or get all cues perfectly but to employ their own vision and who they are into the programs they participate in. I certainly fight to have my own space where being myself is an asset instead of something I have to hide. That is something I have attempted to create in being an entertainment attorney who does legal work but also does things like writing reviews, modeling in fashion shows, acting, and other pursuits not typically associated with attorneys.

So if I get to live life on my terms, then why shouldn't anyone else have that opportunity and space for that purpose? I can see what this program is trying to do and applaud the effort.

A huge thumbs up to the actors involved in the presentations and the individuals involved in this event. As an actress, I'm certainly familiar with the challenges involved in working on these projects and properly bringing heart, soul and an ability to relate to these characters. Those involved did a great job of translating that to the audience.
Posted by Film Co. Lawyer at 7:17 PM