If you want to get insight on the NYC cynic, go see this show ASAP. Get the soundtrack and definitely listen to the songs. After all, our heroes reside in NYC.

This is a show about quite literally the “quirks” of love: the good, the bad and the ugly. Chris (Matthew Schatz) has been recently cheated on by his fiancée so their engagement is off. Ryan (Erin Lamar) is his gay pal who harbors a maybe not so secret crush that everyone except Chris has picked up on while suffering his own relationship troubles. Lili (Maggie McDowell) is the militant anti-man feminist who had her heart shattered by Ryan’s homosexuality and Stephanie (Lauren Testerman) is a woman going through a divorce and consulting with a therapist while having to deal with the unwelcome arrival of Chris. This group, who has a history but we only hear bits and pieces about it, is trying to sort out their lives in the wake of breakups and heartache against the backdrop of NYC, where the romance atheists and agnostics far outweigh the romance faithful. 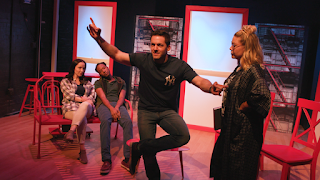 When you step into the AMT Theater, it’s a mix of the modern and the underground. You get the air conditioning and wonderful seating as the modern while the side walls indicate the underground. The blend works very well here and I encourage those of you putting on shows to consider this venue since your audience hates sweltering in the summer (certainly if they’re Southern natives like yours truly).

The opening song alone is worth the price of admission and the music gets even better from there. A special shoutout has to go to Seth Bisen-Hersh for that. If he doesn’t have some stories relating to this show, I’d be shocked since some of these lyrics feel like things you have to have lived in order to come up with them.

Credit also must go to writer Mark Childers and director Brian Childers since this show reminded me of both “Friends” and “Reality Bites” but unlike those projects, this one had diversity in Ryan (a black gay man). In fact, Ryan kind of reminded me of one of my roommates who’s very similar but to my knowledge didn’t date any women who’d had marriage designs on him before he came out or live as roommates with them in the years following that declaration.

I also loved hearing someone else use the term “cater waiter” since the only person I’ve heard use it was the Model Flake, who told me he was tired of being a “cater waiter.” Chris reminded me of a more functional version of the Model Flake though Chris was apparently a college jock, not a male model. One scene in particular definitely reminded me of what Vickie in “Reality Bites” says to the leads who are flirting with “will they, won’t they” and bugging everyone around them with it.

I also wonder if the writers read a particular Cosmopolitan magazine article I heard about many years back concerning a particular sex position my sorority sisters spent a lot of time debating on whether it was actually possible to execute. Is “pinwheel” code for “passion propeller”??? I actually discussed this tale with the gentleman I brought with me to the show since that scene brought back the memory (my verdict was it’s not possible and if it were, the guy would be injured in a very uncomfortable way). 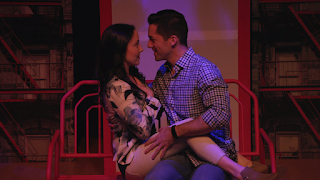 However, this show had a slide show presentation that probably should have been planned a little better with the screen set up. It was a little distracting to have a large black line in the center as this was showing background in telling the story. I also hope our actors weren’t consuming actual alcohol during this show; I’m still not certain since there was a scene where one character is opening a bottle and it looks like she’s opening a fresh bottle. I’d have hated to be them doing so many shows and rehearsals where drinking is called for since eventually someone would have gotten sick or maybe developed alcohol poisoning. I didn’t see anyone have ill effects but a true professional never lets the audience see them sweat or will seamlessly integrate whatever mishap occurs into the action so the audience is none the wiser. The use of the balcony in this show was also new and I think added to the story, perhaps even making the action a bit more inclusive for those who didn’t have front row seating. Supposedly this theater has second floor seating but I wasn’t sitting there. If anyone was, it’s nice that the staging took that into account.

This show is tailormade for any of us who didn’t meet our soulmate in childhood and are still with them to this day (by the way, we all hate you) so that covers a huge group: divorced people, cynical NYC dwellers, the “nice guy” who never gets out of the friendzone, the woman who can’t find a non-sleazy attractive guy to save her life or is dismissed for being too fat, a less popular ethnic minority, too old, too pretty, too interesting, too smart, whatever. Those of you who’ve been through a horrific breakup, especially if was recent, will really love this show and definitely want the soundtrack since the songs are fabulous. They have the cheeky irreverence of “Avenue Q,” a show that I hope hasn’t been ruined by the woke mob. 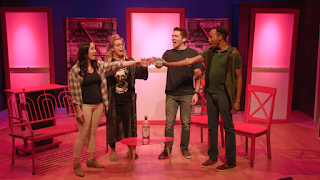 I came here with a guy that I’m still not quite sure is really interested in being exclusive with me or seeing me again after a subsequent travel excursion. I guess I’ll know in about a week when I lay down the law but for a moment there, I thought maybe there was hope after the devastation wrought on my heart by the Energizer Bunny. Maybe there still is since he said he did like the show and hasn’t seemed to attack me for being a cynical, jaded New Yorker since he grew up here himself….

In short, you could let your cynical teens see this one but don’t bring your babies and toddlers. Otherwise, if you’ve ever been dumped, felt rejected by someone you adored or you’re suffering from a broken heart you should see this show at once since you’ll instantly feel better afterwards.
Posted by Film Co. Lawyer at 3:04 PM