The Surreal Adventures of The Angry Redheaded Lawyer: "Your Name on My Lips" presented by Crystal Field (Executive Artistic Director) at Theater for The New City by Eric B. Sirota

* A disclaimer before you read this review: I am a very cynical woman in matters of romance and love. My parents had a dysfunctional marriage featuring my father as an emotionally abusive alcoholic and my mother as his enabling, God fearing wife in the backdrop of the American South, a region known for wives in particular getting the short end of the stick in marriage matters. A lack of money did not help their problems though my mother should be commended for her emotional strength and resourcefulness.

I had no childhood sweetheart, often got dumped by guys in college when I wasn't having to fend off clingy psychopaths I didn't find remotely attractive, fell in love at the ripe old age of 23 and after a marriage of more than 7 years found myself thrown out into the street by the “love of my life” a mere 9 months after my father's sudden death with no real explanation except his stating “I don't want to be a subsistence farmer” and him thinking it was my duty to be his meal ticket so he could sit on his butt and do nothing.

After a very bitter divorce and 16 months as a transient in NY and CT, I have slowly been trying to make myself whole again if not better. To say that I do not believe in love and don't trust anyone is a gross understatement; I even got a tattoo many years ago commemorating the fact that true love does not exist for yours truly.

So for those of you reading this review, please bear this perspective in mind. You might agree, you might disagree but this is my honest critique.

Perhaps the night I saw this show wasn't the best time as I did have a brief panic earlier in the day that a guy I'd seen recently is & has been carrying a torch for someone else; yeah, most women and especially me do not want to deal with any guy carrying a torch that isn't for her whether you are just friends with benefits, boyfriend/girlfriend or getting engaged. *

“Your Name on My Lips” is about an artist named Sam (Matt Mitchell) who comes from a troubled family background but finds his artistic muse in a young girl named Suzanna (Michelle Siracusa). As they grow into teenagers and into high school age, they become romantically involved and Suzanna even loses her virginity to Sam. 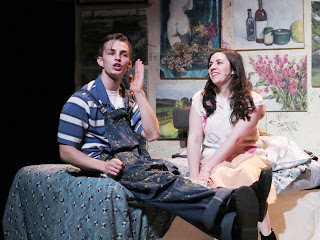 Like many young girls, Suzanna comes from a modest, middle class background where her father (Brandon Grimes) loves Sam's vision of Suzanna and how much Sam clearly loves her while her mother (Erin Evers) is more of a social climber type. She dismisses Sam for his lack of drive to become a millionaire or hailing from a good family and really wants Suzanna to marry rich, including dating George, the son of an affluent banker in their town (Jarred Bedgood) even though Suzanna has no romantic interest in him. Of course Suzanna is going to attend college and she attends a school far away from her childhood home. 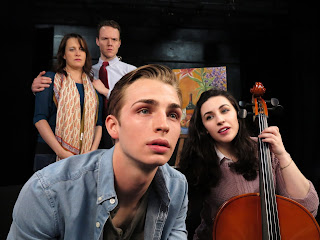 "Your Name On My Lips," written and composed by Eric B. Sirota, directed by Gerald vanHeerden, presented by Theater for the New City March 2 to 19, 2017. Foreground: Matt Mitchell as Sam and Michelle Siracusa as Suzanna. Behind: Brandon Grimes and Erin Evers as Suzanna's parents. Photo by Jonathan Slaff.

While in college, Suzanna ends up meeting Phil (Clint Hromsco). Phil is another guy from money who introduces Suzanna to drugs, cocaine in particular. As Suzanna and Sam are apart and see each other sporadically, Suzanna is torn between her devotion to Sam and the siren sound of wealth, affluence and materialism. Sam faces his own temptations via his friend Jack (also played by Grimes) to go after the lovely, more in his league Kate (also played by Evers). The difference is Sam stays true to his Suzanna while Suzanna throws Sam under the bus in more ways than one.

Suzanna decides to bring cocaine to see the anti-drug, anti-alcohol Sam (whose parents were killed by a drunk driver, as we learn at Suzanna's 12th birthday party). When the police notice the drug she'd discarded, Sam took the fall for her so she would not get kicked out of school and have her life fall apart. Eventually, Sam is released on a technicality but the police officer and public defender even engage in a song called “No Girl is Worth It” to prove the utter futility of this act. Suzanna is nowhere to be found in Sam's time of need but not to worry: Fantasy Suzanna (Aja Downing) comforts him while Suzanna is being a wussy little B.

Suzanna also refers to Sam as “just a friend” while talking to George, unknowingly in Sam's earshot. However, it feels like a warning to Sam that Suzanna isn't nearly as devoted to him as he is to her. Even Suzanna's college roommate Beth (also played by Evers), who at first tells Suzanna to go live the college experience, later changes her tune about Sam. She tells Suzanna outright that if a guy felt about her the way Sam feels about Suzanna, she'd not throw that love away like Suzanna is doing. 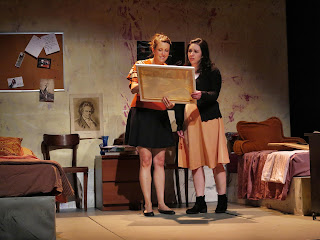 Another act of betrayal is Suzanna's hooking up with Phil, which leads to her getting pregnant. While in the hospital, presumably approaching death, she claims that she loves Sam and claims to love him and that she'll have “your name on my lips.” After the doctor comes in to tell him Suzanna will be fine, he notices the diamond ring on her finger. It turns out Suzanna is pregnant with Phil's baby, is engaged to him and is a big fat liar.

I really wanted Sam to yell “Fuck you, bitch” all Eminem style in the face of all this betrayal and nastiness against him, perhaps right after the drugs scene. But alas, that's not our Sam. He acted far more graciously than just about any man in America would if confronted with such a scene. Fortunately, Fantasy Suzanna reappears and talks sense into the man so he doesn't throw away his future over a cold, materialistic liar. Sam eventually gets his full scholarship to art school and decides at the end to go pursue his dreams and leave the real Suzanna behind.

You have to wonder what poor Phil is thinking about this woman who sat here and claimed all this devotion to a guy that wasn't him. If she's not lying about her feelings for Sam, you have to wonder what type of marriage and family upbringing this kid is going to have. Will Phil eventually tire of moral duty and leave Suzanna to carry torches for other guys, maybe taking their kid with him? We learn that Phil has pure intentions toward Suzanna and wonders if she'll ever get over this other guy to feel that professed devotion toward him someday. Perhaps that child will grow up to be as cynical about marriage as I am. 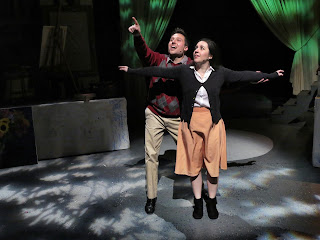 The cast as a whole was extremely talented & needed to be as this was essentially a musical. Jarred Bedgood is an extremely talented dancer, as we saw when Sam meets with the art dealer to decide what works he would like to buy from Sam. I also thought the songs were well done (especially “No Girl is Worth It” and “Joules/Jewels,” a song that's funny, blunt and painfully accurate), the scenes at the party were great, Beth had some great song lines that made me laugh and you definitely felt empathy for Sam.

I just lost my empathy for Suzanna around the time she was trying to get Sam to use drugs or maybe it was when she told George Sam was “just a friend.” It is absolutely nothing personal against the actress. I'm not sure what her direction and aim toward the character was but if it was to not make us have empathy or sympathy for Suzanna later, she succeeded.

I would have liked to see how Suzanna viewed herself in light of this behavior. Is she aware of how her conduct harmed Sam? Does she hold herself up as a great human being? Does she feel ANY remorse at all for playing these men? I suppose I saw none so that led to me losing any empathy toward her and really wanting her to be the recipient of an Eminem style verbal smackdown. Another random fact about me is that I have been told I think like a guy with regard to relationships so I despise fickle females like Olive Oyl from the “Popeye” cartoons.

Thank God for Fantasy Suzanna. I feel like she deserved a better introduction earlier on and the actress herself was underutilized. She brought a quiet, calming presence to the proceedings and her talking sense into Sam made me leave the show feeling a little better about humanity. 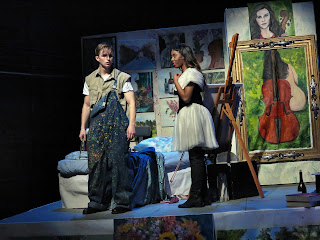 I've been to Theater for The New City a few times, even doing a show there myself once but had never been to the Johnson Theater. Nice auditorium and I liked the set design for this show. It seems the writer was also taping the show and I overheard him speaking to audience members near me about this show; he said that it was a work in progress until he got it to Broadway. Well, as a woman I would have liked to see where I could feel any real empathy for actual Suzanna later on vs. thinking she's another portrait of why men don't trust or have any loyalty to good hearted women who'd never put crass materialism ahead of true love.
Posted by Film Co. Lawyer at 6:07 PM