The Surreal Adventures of The Angry Redheaded Lawyer: "The Wizard of Oz" by the Harlem Repertory Theatre in association with The Yip Harburg Foundation

The timeless story of “The Wizard of Oz,” brought to life by a jazz soundtrack, modern & innovative musical numbers as well as an ethnically diverse cast (except for natural redheads, which I will get to later) is given a modern and fresh take at the Harlem Repertory Theater in association with The Yip Harburg Foundation. As background, Yip Harburg found in L. Frank Baum's classic book a story that was applicable to all races and backgrounds instead of that portrayed by the Hollywood film.

When I walked in, I was greeted by the most friendly staff and was instantly escorted to my seat right in front. For those who have never been to the Harlem Repertory Theater, it is literally an immersive experience. The audience seating is located on an uphill incline in a circle while the stage is located at the bottom and the jazz musicians were placed right next to the stage on the left. There was no problem at all with not being able to see if you were sitting in the back and the setup was traditional like when theater began in Ancient Greece but the atmosphere was far from stuffy, dull or boring. Jazz was playing as we were waiting for the show to start and whether the presence of kids had anything to do with the homey touch and feeling or not, I thought it was a wonderful vibe. In fact, this was one of the best venues I have ever seen a show in because of the warmth and comfort in the atmosphere.

The dance numbers, choreography, music and the presentation of the show was wonderful. The actors came right into the audience though no one touched audience members or made anyone feel awkward from what I observed. I like that Dorothy had on a more traditional outfit for a girl living on a farm in the first act and how the dancers moved in the tornado scene. You definitely felt that tornado hitting the farm. 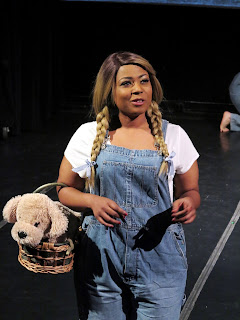 I love that the Wicked Witch of the West was a redhead. Somebody did their research on redheads (insert devilish grin here). My mother, herself a natural redhead, will tell you that “redhaired children are mean”; eventually, we grow up into redhaired adults and continue to disturb the order of things—I like to think my mere presence as a natural redhead accomplishes that. I would have liked to see a natural redhead doing something though I get the realities of rarity (we are 1-2% of the global population, after all) & if you were looking for a redhead who is also black or of Hispanic/Latin origin, then you have even more difficulty even though a couple of those redheads have spoken up on social media groups I've posted in. I face my own problems existing in a “niche” that is almost never represented nor entirely respected and regarded in many places. Apple, I'm looking at you.

Despite this, the actress who played the role (Emily Ramirez) definitely pulled off the evil and nastiness of the Wicked Witch/Myra Gulch. 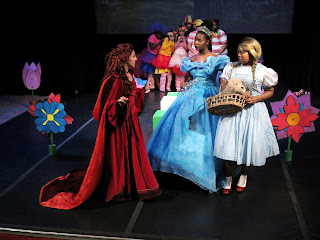 In fact, all of the actors were great in their roles along with the dancers. I like that all the dancers weren't your stereotypical, uniform skinny dancers who looked exactly alike. Aside from that whole redhead slight, I applaud whoever did casting in picking performers who represent everyone who might have a dream of doing this someday so kids of all body types and looks could see themselves reflected in this show. This being a show kids were invited to see, I like that someone was thinking about this issue. 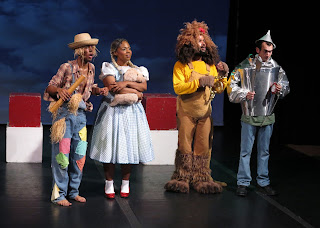 One of the best moments in this show was when our heroes were in the castle of the Wicked Witch of the West and the Lion scares off the guards. A kid shouts out “You did it, Lion!” The actor playing the Lion (Dexter Thomas-Payne) looks in the direction that shout came from and gives the kid a thumbs up. I thought that was a sweet, impromptu moment. You could tell that the cast really liked doing this show for the kids as I saw many hang around afterwards to talk to and take pictures with them and their families. If anyone was phoning it in or merely humoring these kids, I never saw it. 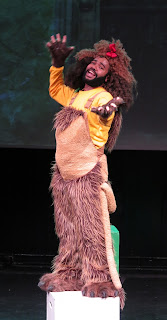 The variations from the movie we all know were also quite good. No poppies but you did see the Gale family rebuild their farm so things ended more happily for them and we saw that the tornado did in fact cause damage they had to fix vs. the movie ending where Dorothy wakes up in her bed, talks to everyone who came to see her after her injury and it ends from there. The jazz soundtrack also worked well for the story and definitely made it more universal in its scope.
Posted by Film Co. Lawyer at 1:32 PM