The Surreal Adventures of The Angry Redheaded Lawyer: "Vera & Valya & The Magical One Cat Circus" by Reckless Tricycle

Reckless Tricycle, a self described “young company interested in clowns, animals, dark farces and dumb ideas turned beautiful” brings its first offering to the New York stage in “Vera & Valya & The Magical One Cat Circus” at Standard Toykraft in Williamsburg, Brooklyn. This show is “a farce based on age old Russian fairy tales.” Though this is no way my field of expertise, I did find this show very entertaining.

This is the tale of two sisters, Vera (Sarah Traisman) and Valya (Nadja Leonhard-Hooper) who are cursed in their own ways. Vera is incapable of telling a lie at all and Valya falls in love with anyone who comes through the door to their small home out in the middle of nowhere part of Russia. Vera and Valya desperately want the great Victor Voronin (Jeremy Brick), the owner of the Moscow Cat Theater to recruit their magical cat Skaza (which means “furry tail”) for his show. Vera wrote Victor Voronin some years back and the sisters continue to train and await his arrival to see their great cat Skaza in action. 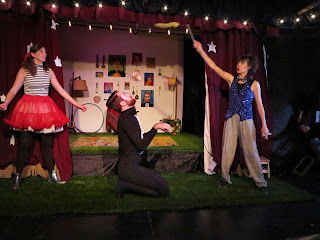 Reckless Tricycle, a young-and-hungry troupe of comedic writer/actors, makes its New York debut with "Vera & Valya & The Magical One Cat Circus," a farce based on age-old Russian fairytales, November 3 to 19, 2016 at Standard ToyKraft, 722 Metropolitan Ave., Brooklyn. The piece is conceived and written by Nadja Leonhard-Hooper and co-directed by her and Olivia McGiff with dramaturgy by Liesl Schillinger. L: Nadja Leonhard-Hooper as Vera. C: Collin Knopp-Schwyn as the Cat. R: Sarah Traisman as Valya. Photo by Jonathan Slaff.

Meanwhile Andrei (Patrick Brady), a detective who hunts for missing children, poses as Victor Voronin and proclaims that the sisters have actually tricked a small boy into believing he is a cat. As the sisters can't have their cat taken away if they want to achieve glory in the Moscow Cat Theater, they tie Andrei up until they can figure out what to do. While they are deciding Andrei's fate, the real Victor Voronin arrives to see this amazing act he's heard so much about.

Vera and Valya believe the Moscow Cat Theater is a theater patronized by cats but it turns out the cats are only the performers. Victor wants Skaza for their act but the sisters declare that Skaza only performs for other cats. Andrei escapes, the cast suddenly launches into a musical number and each sister's curse ends up being broken. Vera tells Victor where he can create the illusion of a magical cat that turns out to lead to the home of Baba Yaga, a which who will eat him just as she does all the capitalists. Valya declares she is no longer in love with Victor after he threatens to make Vera disappear. 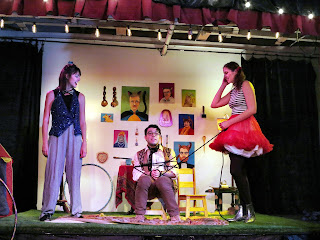 In the absurd comedy "Vera & Valya & The Magical One Cat Circus" by Nadja Leonhard-Hooper, two sisters of Yaroslavl train a magical cat, hoping someday to join the illustrious Moscow Cat Theatre. L-R: Nadja Leonhard-Hooper as Vera, one of the two sisters (who falls in love with everone who comes through her door), Patrick Brady as a detective impersonating the producer of the Moscow Cat Theatre, Sarah Traisman as Valya, the other sister (who cannot tell a lie). Photo by Jonathan Slaff.

The venue is a literal warehouse space in so “underground” theater. If you long for the days where you could go to a show without pretension, barriers or stuffiness, you definitely have to check out Standard Toykraft in particular. I felt like I was attending a show in someone's indoor backyard in terms of design and lighting and loved the informality of the setting. They even had benches on the side for seating and a hanging basket chair in the lobby I had fun sitting and swinging in.

However, one should not equate informality to amateurism. This cast was amazing, especially Collin Knopp-Schwyn, who played Skazka (the magical cat). He conducted himself as a better cat than any human performer I have seen. He did the cat movements pitch perfect and sold this brilliantly even when I was watching and wondered if he was going to be able to keep the cat movements such as jumping. I love when he moved the hoop down to his level to jump through it with his “paw” as that's something my old cat Stormy would do if you held a treat up too high for his liking. In a twist of irony, Stormy was a Russian Blue.

There was interaction with the audience, a live mirroring exercise between the two Victors, a calling out of the accordion player who provided musical accompaniment and plenty of funny moments. No dull moments in this one though I'm not sure if this is the show to take small children to unless you are a more liberal parent. Teens would be fine, perhaps older or more precious children could understand and follow the humor of this story.

Here's hoping we see more from Reckless Tricycle through The Tank or some other venue. 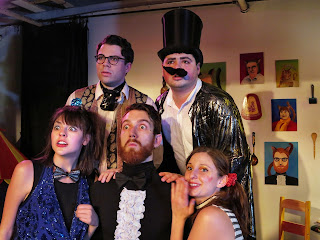