As it seems my reviewing talents will not be going to waste despite my no longer writing for "Woman Around Town," this shall commence into an official series I've dubbed "The Surreal Adventures of The Angry Redheaded Lawyer." My adventures are surreal b/c they usually lead to contacts and directions I never foresee or expect. I'm also open to new adventures and opportunities as this is how we expand our minds, learn new things, make new friends, all that good stuff which makes us grow as human beings.

Case in point: this fashion show I will be writing on. Bear in mind that I never said I was a fashion blogger, nor do I pretend to be an expert at this. I'm not a fashion expert but I do know what I like & I do know the experience as a model who's worked in various venues + have talked to designers, photographers and others in the fashion game. I also have my own style and since this is my page, I'll write as I choose.

Mix this in with my background as a review/critique writer and humorous rant writer, and we may find some interesting results here. So, here goes:

Ahmani Croom Productions did its first show with the theme "Karma." The theme alone was enough to sell me on going. A woman who's gone through what I have and had an evil ex-husband who tried to sabotage her modeling career before it could really get started is probably your ideal guest for such a show. In sum, you had me at "Hello." 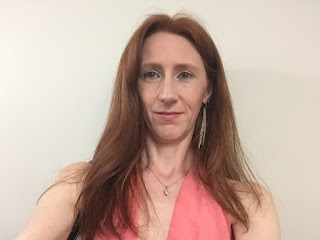 I came in on my press pass and we waited a bit (as you're often prepared to do when you go to a fashion event). Not being a professional photographer but wanting pics of outfits for this write up, I invited a close friend who's been to a lot of fashion shows as a spectator to be my guest along with another friend who's recently moved to NYC and deserved a glimpse of my entertainment scene/world. I also wanted a female perspective from a non-model/designer/fashion person. Unfortunately, my fashion outsider couldn't make it but my fashion insider did show up & took many of the pics you're going to see here.

I find a seat right in the front row & frantically save one for my photo taking friend. Unbeknownst to me, there was a separate section for press in a different room. The setup at The Highline Loft (the venue for this) was unique as you had two separate rooms connected by a hallway where we could see the models come in and out. Now if it were me, I'd have had a curtain up there or tried my best to avoid having you see the models before their official walk in the room where I was and where the entertainment and action was taking place. Or I might have had my models engage in a little showmanship like maybe wave to the crowd as they passed or posed specially or something. As an actress who's done that a LOT longer than modeling, I often incorporate my acting background into my own show performances. I've also seen one male model in particular I've worked with who is a master at this & quite beloved by the women. Had I been a model, I'd have wanted to do that as I feel when the audience can see you then you are "on" and need to own it.

The show started off with the hosts talking to the audience and engaging them. They picked a couple people to walk the runway and talk to the crowd. As is my fate in life, I was one of the people picked. Unfortunately, my zebra print heels (another item of karma) had been killing my feet by this time so I'd switched to my sneakers and was walking in those. However, I did my best to rock it as is. The top you see in my pic was specifically chosen for this theme as well as the necklace I had on; both came from my ex's family and I'd decided to wear them as part of my reclaiming of things with negative associations. My own take on the "karma" theme since isn't it delicious to wear something you got from people who hated you modeling to a fashion event? I'm not sure if our host knew I was a model or the producer pointed her out to me ahead of time but I liked my 5 minutes in the spotlight.

I love that this show incorporated the audience and made everyone feel they had worth in the world for being there. I saw no air of "I'm better than you" at this event, which is most certainly not the prevailing image of the fashion world or modeling.

A couple of professional dancers started off this event. I didn't get pics of them but they were quite good and it appears they were clothed in High Lights brand by Willie Fulmore III. Great stuff, these guys and their attire. You could definitely wear it in your normal, daily life or in a performance atmosphere for points for utility (I'm big on clothing & pieces that work in many different settings).

The first designer was CLEONS Clothing, by designer Chad Leon. He had a lot of male models in his segment, which my temperamental friend claimed he wouldn't photograph. I decided to get those pics myself where I got some decent angles. Check these out:

Now, as a straight woman we appreciate the presence of male models and getting eye candy as the straight men & lesbians always get their eye candy with female models. Bravo to equality!! I found his looks to have a mix of classic and a funky, retro feel in club wear. His website states that if you wear one of his designs, you should "feel like a different person...like an alter ego." I most certainly saw that here.

The second designer was Fabric Twinz. The collection I saw featured formal wear with both long and short dresses. Feast your eyes on these, taken by Craig Herskowitz:

(Craig said he liked this one) 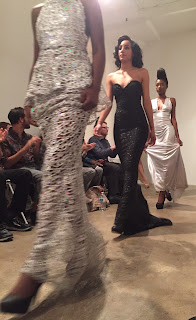 (The black dress you see in the center felt like the model for what I'd wanted in my wedding dress; I still kind of want that great black dress though I won't be wearing it in any wedding of mine in the foreseeable future.)

I would wear these dresses, without question. I'm also a bit of an evening gown junkie & LOVE dressing up; maybe that's why modeling eventually found me.

The third collection was Toriola, Inc. by designer Tory Famuyiwa featuring his Peacock Reincarnate collection. There was some great stuff here but the one dress I really found super interesting was not one my friend got a great shot of. However, there were other fantastic & more practical designs captured by Craig Herskowitz:

(You can't tell me you don't love the eyes)

I loved the color scheme and felt like anyone could wear it, including my pale, naturally redhaired self. This collection had a mix of the modest and the sexy.

The final segment of the show (after a break for the cocktails, which I'm still wondering if it was rose--my friend thought the drinks were yummy but didn't know if it was rose when I asked him) was bird by Leigh Grahill for the clothing and Trash Cookie by Joy Vay for the accessories. This was a marriage made in heaven.

I say this because as I was viewing these designs I saw the aesthetic of Betsey Johnson, one of my favorite designers and likely someone who's clothing I'd own a lot of if I had more money to buy it. Witness these pics Craig Herskowitz took and tell me you don't see it: 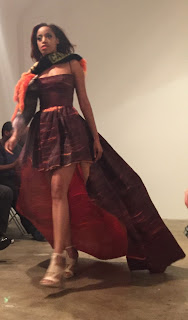 (I LOVED this boa & found it inspired)

(I love the model's expression here; this is how you want your models to feel when they're walking)

Yeah, the last collection was definitely something in this "cool" lawyer's wheelhouse & of her aesthetic.

When you're modeling, that time on the runway feels like eternity but it's really short. You get told to stay out there for a while, pose, etc. for 30 seconds to 1 minute. You're thinking "no problem; it'll fly by" but it doesn't when you're out there. As a result, most models forget to do that hesitation. I saw some of that here & finally understood what photographers meant when they'd told me and other models to "slow down." Sometimes you're at a loss for what to do & you have to consciously slow your brain down.

Thank you to the models who posed when they first came into my room so we could get better pics of you!! I'm sure the professional photographer taking pics a few seats to my right also appreciated it. Overall, I'd say no one struck me as terrified or a total amateur at this; I'm not sure I'd call myself an expert model or a "professional" at it but I didn't see amateur hour here.

Other than some venue limitations like the heat, some acoustics being off and that weird room setup (apparently the second room was for press while I imagined a press pit being a literal segment where I'd be dodging elbows to get any simple smartphone pictures for my entry), I'd declare this show a success. Ahmani should be quite proud of her work and based on the track record of her designers, you should keep your eye on her and her team. Everyone struck me as professional, polite and definitely on a level I've not always seen in my own experiences.
Posted by Film Co. Lawyer at 7:55 PM