NY Comic Con, Day 3: Is There Anyone In This Industry With a Name Who's Not an Asshole?

After our anniversary, we decided to go to Day 3 of Comic Con. For one thing, when you pay for a 4 day pass you should use more than 50% of it. For another, my husband says that's the day when you can get good deals from the comic book guys since they don't want to lug things back if they've traveled from far away to set up their booth.

Sadly, I bought nothing that day since things I wanted were long gone. Plus I figured I'd spent enough and seen enough. I chose to see about getting Chris Elliott's autograph since he was scheduled to be there and I didn't have any time conflicts pressing on me.

There were quite a few people with autograph tables & personal appearances at Comic Con. Most of the prices were highway robbery in my book. For instance, my mother's favorite Doctor from Doctor Who (Peter Davidson) was there but I didn't go get an autograph since his price was $40 & my mother's not big on celebrity anyway. My mother prefers him because, as she puts it, he's cute. This is certainly not untrue if you've seen '80s Doctor Who. I, however, was forced to watch it as a child along with my sister since we had one television set and PBS played it all day on Saturdays. After cartoons went off, we had to watch this all afternoon.

My mother is so not impressed with celebrity that she has zero desire to meet one in real life. If she happened to do so in her travels & that person was an ass to her, I guarantee you she'd tell that scumbag off. She is a natural redhead herself, after all.

Chris Elliott's autograph price wasn't ungodly & I figured I'd point out that I charge about 10 times more for an hour of my legal services than he was charging for an autograph and when you inevitably need the services of an entertainment lawyer, I'll be making sure you get no discounts from me. Maybe I'd even up the rate as a form of compensation for having you offend me in the first place by charging me for an autograph & likely not declaring that money as income to the government. Or, perhaps, charge you more as a means to have me behave myself & not hurt you if you do something slight to offend me since you already did something major to bug me w/that whole racket for your autograph.

Now, I'm being less that literal with that since I'd actually not bother doing squat for you in the first place if you're charging me money for an autograph considering entertainment lawyers are the ones who keep the talent from entering bad deals that leave them penniless. It's in any performer's best interest not to be an asshole to an entertainment lawyer.

Just as being mean to an agent or casting director can get you blackballed, so can doing so to an entertainment lawyer. Some of us DO have friends.

So as my husband was playing tour guide for those friends of his who only had Sunday passes and are much more into the comics & sci-fi scene than I am (that forced watching of Doctor Who & other sci-fi fare does play a role), I decided to start out in a line after the last people at the assigned table left so I'd be first or darn close to it & being certain to get the autograph. I would have considered doing this on Friday but I forgot the DVD booklet.

As I was standing in line, a gentleman in a press pass announced that Chris Elliott had been a no show for the past 2 days he was supposed to be there. A staffer at Comic Con even said that they had tried contacting him and his management with no word from either one. As people came into the line, we warned them about the possible no show. He was scheduled to be there from 2:15 to 3:15. I opted to wait until 2:30 under the 15 minute rule. One guy behind me told me that he'd lined up for both of the earlier days to see Chris Elliott's no showing behind.

As time moved closer to 2:15, no showing & no word. The staffers who were dealing with us even apologized for it. The guy with the press pass was quite mad & I talked about what I do and that it was highly unprofessional that NO ONE had told anybody about this whole thing & just did a no show. Press fellow told me that if he waited on Sunday, he'd have wasted a total of 6 hours waiting on this jerkwad & would be pissed. I wished him well on that & said at least I had come there mostly to shop and found stuff I liked. I would have passed on my business card but he left the booth before I did & I didn't see him again.

Since I have a life, I left at 2:30 & decided to start taking more pictures of great costumes and hang out with my husband and his friends.

If Chris Elliott could blow off Comic Con, a major event, there's no way in Hell I could trust him or any of his management team to show up for my company's stuff. If you own an entertainment company, you should feel the same way.

Funny thing: when my husband & one random guy in a group who came up to ask what we were waiting on heard about this, they both said "What does he have to do today?!" My husband referred to Chris Elliott as "that asshole."

Yes, Chris Elliott, I'm sure a multitude of Con attendees and the general public would like to know that one. I don't care if you were in the hospital or your grandmother died: you tell someone or have your manager do it. This is entertainment industry standard & a basic professional norm. Not doing it means you get a lot of people who won't take that shit.

This also says volumes to me about Michael Lasker of Mosaic & Christie Smith, who are both listed as his managers. Neither of them better be sending me or anyone I know solicitations for their clients since I will say "Your client Chris Elliott bailed on Comic Con with zero explanation or apology & none of you provided one either. Clearly you recruit unprofessional people, actively encourage it in your clients or refuse to effectively discourage your clients from doing this. Tell me, which is it? Why are you wasting my time? Do you think I'm stupid?"

There's no way in Hell I would have my company work with Chris Elliott and I hope no one else makes that mistake since it seems to be nothing but unprofessionalism if you make that foolish mistake. At a minimum, you can tell there's a lack of disrespect for the consuming public. Who needs that to dampen sales or harm public relations? While I can understand the fan hate & not wanting to deal with the crazies, you can at least tell someone if you can't show up to something instead of making people wait like they're a bunch of peasants & you're the fucking King of the Galaxy. That attitude will piss me off in about 5 nanoseconds & get you on my permanent black list.

After that whole Mark Bagley thing, I do wonder if there's anyone involved in Comic Con who is a name & is NOT a total asshole? I don't give a shit about your actions to an audience; I care about your behavior toward me specifically and toward the Comic Con staff, whom you are responsible to. How you treat them is a great indication in my mind of how you'll treat me & my business. I also think it's pathetic to be mean to the people who have the least amount of power in a given situation be it servers in a restaurant, extras on the set or anyone who already gets derision in some fashion for his/her mere presence. 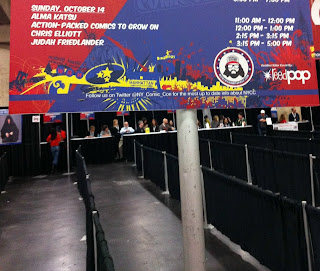 To salvage the day some, I took some pictures of folk in costume. Here you go:

Here's Captain Planet! That Robot Chicken sketch with Ted Turner doing it also reminded me of that time Ted Turner came to speak at Oglethorpe. I think I wrote about that before but if I didn't, I will in the future. 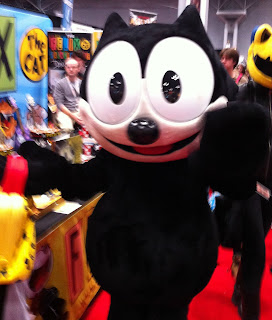 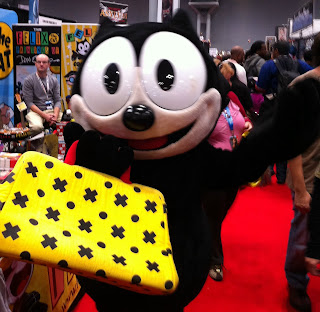 Felix & one with his bag. I like Felix the Cat so seeing that did make me smile. 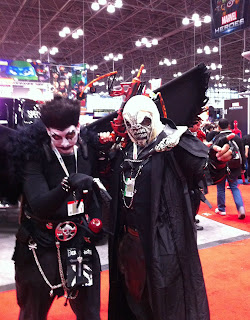 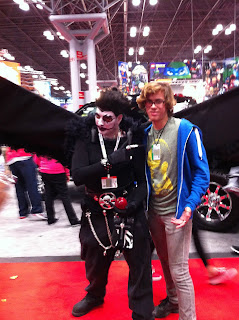 When I had nothing to do and others were taking pictures of folk in costume, I decided to just take a picture as well. Here's more: 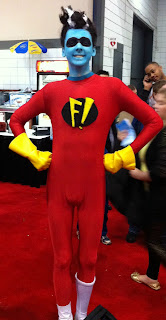 Yes, Freakazoid! My husband remarked "His balls are hanging out!" Judge for yourself, folks. My husband also got the show when it came out on DVD. 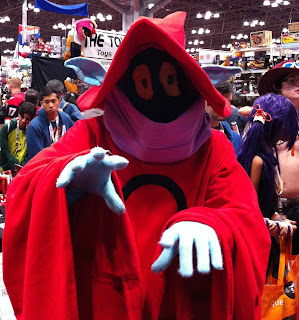 Orko from He-Man! This Orko was cool & very happy to let us photograph him. This was a shot I got as friends were taking their picture.

After this, we went out to dinner as has become a tradition. This time, we chose 5 Napkin Burger. Service was SLOW but the food was pretty good. The burgers are very juicy so make sure you prepare for that.

My husband asked if I'd go to Comic Con next year. That's a good question since I'm not sure. There wasn't much of that networking I wanted (though I did get to confront that lying asshole who told my husband he had Rocko & Heffer plushes and NEVER followed up; I'll have to send him another reminder e-mail shortly). I think I will tell him "no sale" since he's obviously not bothering to follow up with anyone.

Shopping = awesome but will I find anything new in my second year?
Networking = nil; don't bother if that's your goal & you work in the entertainment industry
Panels = they were okay but not sure I can stand the obnoxiousness of fans & it's not even my property involved
Spending time with hubby = great
Seeing odd costumes & unusual stuff = some of what I saw & pics I got weren't half bad

I think the jury's still out on if I'll go again or not. At least I have almost a year to think about it.
Posted by Film Co. Lawyer at 3:56 PM